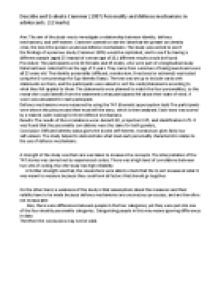 Describe and Evaluate Crammer (1997) Personality and defence mechanisms in adolescents.

﻿Describe and Evaluate Crammer (1997) Personality and defence mechanisms in adolescents. (12 marks) Aim: The aim of the study was to investigate a relationship between identity, defence mechanisms, and self-esteem. Crammer wanted to test the idea that the greater an identity crisis, the more the person would use defence mechanisms. The study was carried to see if the findings of a previous study (Crammer 1995) would be replicated, and to see if by having a different sample (aged 23 instead of a mean age of 18,) ...read more.

The statements were planned to match the four personalities, so the researcher could identify from the statements what participants felt about their state of mind. A score was calculated for each participant. Defence mechanisms were measured by using the TAT (thematic apperception task) The participants were shown the pictures and then must tell the story, which is then analysed. Each story was scored by a trained coder looking for three defence mechanisms. Results: The results of the correlations were: denial 0.80, projection 0.85, and identification 0.78. ...read more.

There was a high level of correlations between two sets of coding, thus the study has high reliability. A further strength was that, the researchers were able to check that the Q-sort measured what it was meant to measure because they could look at factors that should go together. On the other hand, a weakness of the study is that assumptions about the measures and their validity have to be made because defence mechanisms are unconscious processes, and are therefore not measurable. Also, there were differences between people in the four categories; yet they were put into one of the four identity personality categories. Categorising people in this way means ignoring differences in data. Therefore the conclusions may not be valid. ...read more.