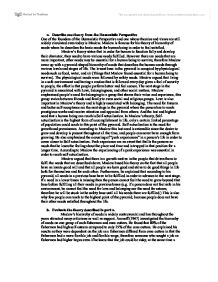 Describe and evaluate one theory from the Humanistic Perspective

a. Describe one theory from the Humanistic Perspective One of the founders of the Humanistic Perspective and one whose theories and views are still widely circulated even today is Maslow. Maslow is famous for his theory of hierarchy of needs where he describes the basic needs for human being in order to feel satisfied. Maslow's theory states that in order for human to function fully and develop their character, they need to have various needs fulfilled. However there are needs that are more important, other needs may be essential for a human being to survive; therefore Maslow came up with a pyramid-shaped hierarchy of needs that describes the human needs through various levels and stages of life. The lowest base in the pyramid is occupied by physiological needs such as food, water, and air (Things that Maslow found essential for a human being to survive). The physiological needs were followed by safety needs. Maslow argued that living in a safe environment and having a routine that is followed every day gives a feel of security to people, the effect is that people perform better and feel secure. ...read more.

Maslow based his theory on the fact that all people have an innate good will and that all people are born good and strive to do good things in life both for themselves and for each other. Furthermore, he explained that according to his pyramid, all needs in a previous base have to be fulfilled in order to advance to the next stage. If a need in a lower bases is missing then the person cannot feel the need to grow beyond that base before fulfilling all their needs in previous bases (e.g. if a person does not feel safe in his environment, he cannot feel the need for love and belonging nor the need for esteem, therefore he will be stuck in the safety base until all his needs there are fulfilled.) This is also why few people can reach to the highest point of the pyramid, because people does not have their other needs satisfied throughout the life. ...read more.

This is an example of culture differences that makes Maslow's theory useless in comparing cross-culturally. Other critics meant that Maslow's theory was not applicable for all human being and that there were people who remained outside the pyramid. One example of that are monks who devote their life to religion. The monks does not experience Love and Belongingness in form of sexual relationships, therefore according to Maslow the Monks would not be able to exceed the Love and Belongingness section of his pyramid. Yet it is evident that the monks come to reach highly spiritual experiences that make them more eligible to perceive a peak experience and therefore come closer to self-actualisation even though they have skipped some parts of the pyramid in their way. In conclusion, there is much evidence both for and against Maslow's hierarchy of needs, yet it is still one of the most logical and functioning theories we have and therefore it still remains strong and untouchable by the critics. ?? ?? ?? ?? ...read more.