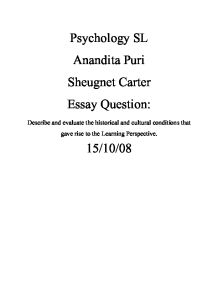 Describe and evaluate the historical and cultural conditions that gave rise to the Learning Perspective.

Psychology SL Anandita Puri Sheugnet Carter Essay Question: Describe and evaluate the historical and cultural conditions that gave rise to the Learning Perspective. 15/10/08 Describe and evaluate the historical and cultural conditions that gave rise to the Learning Perspective. Learning perspective is a hypothetical construct, and describes a process that cannot be directly observed, but merely inferred based on observable behavior (Carter, 2008). Behaviorism is dominated by two primary types of conditioning: classical and operant (instrumental). Classical conditioning, which was first developed by Ivan Pavlov, describes the repetition of using a stimulus in order to elicit a desired response. Operant conditioning on the other hand, is based on consequences of actions. For example, if an action is positively reinforced, gradually it becomes learned, and vice versa. In order to examine the birth and development of the learning perspective, it is essential to look at the various theorists, their ideas and contribution to the world of Psychology. Present amongst these behaviorists are conflicts between ideas, development of each others' ideas as well as production of entirely novel ideas. One of the first influential psychologists, Ren� Descartes (1596-1650), much like Plato and Aristotle believed in the concept of nativism. Opposing most behaviorists following his work, he believed that knowledge is inbuilt in our biological structure, and therefore learning and experience play relatively small roles in the psychological make-up of a human being (Carter, 2008). ...read more.

Soon, the animal learns that pressing the lever lets them escape, which acts as the positive reinforcement. Eventually, this action is learned and therefore the animal has been conditioned to press the lever (Reinemeyer, Erika. 1999). Thorndike also pointed out that the time taken to escape decreased every time the experiment was conducted. Through this testing, he introduced the Law of Effect, which states that if the trial and error leads to success, the action is likely to be reproduced. However, a failure is unlikely to be repeated. Finally, he stated that what is learned most recently will be carried out best, which is know as the Law of Recency (Carter, 2008). One of the first theorists who supported the idea of classical conditioning was Ivan Pavlov (1849-1936). Beginning his career in the field of science, he was studying the digestive system in dogs. This then developed into his most famous experiment, where he tested the conditioning of salivation of dogs. Divided into three basic stages, the experiment describes how a dog's reflex to produce saliva can be conditioned without having to actually produce food. During the first stage, food (the unconditioned stimulus) is brought in front of the dog, producing saliva (the unconditioned response); at this point, no learning has taken place. Next, along with the food, a bell is rung (the conditioned stimulus), again producing the same unconditioned response of salivation; this stage describes the process of learning. ...read more.

He believed that all complex behaviors can be broken into smaller, simpler ones. This was illustrated through the use of pigeons, as he displayed that he could condition them to roll a black ball to and from each other, with the use of positive or negative reinforcement. Much like Watson, he also believed that internal mental thoughts are not observable and so are not useful to analyze (We Didn't Start the Fire, 2008). One of his most eminent contraptions is know as the Skinner box, which in several ways resembles that of Thorndike's puzzle box. In it, he kept an animal trapped, with a lever or button that provided some sort of positive reinforcement. One particular experiment describes a starved rat trapped in this cage, and when it presses the lever, a small pellet of food is dropped into the cage. This acts as positive reinforcement for the rat, and therefore encourages it to repeat this action. Slowly, it becomes learned or conditioned into the rat (Rubin, Julian 2007). There are various outlooks, theories and conflicts provided by a wide range of behaviorists, which over the course of approximately four hundred hours gave rise to the learning perspective. Conflicts arise between operant and classical conditioning, the existence or validity of studying the existence of mind, nativism versus empiricism, and many more. The experiments conducted in order to prove these theories help us understand how each aspect of behaviorism is justified and how or why it is or isn't true. Having studied a wide range of behaviorists makes it clear as to how the concept of behaviorism came to be. ...read more.