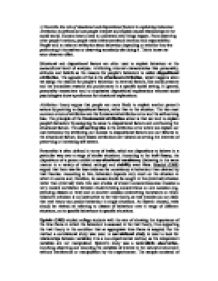 Describe the role of situational and dispositional factors in explaining behaviour.

1) Describe the role of situational and dispositional factors in explaining behaviour. Attribution is defined as how people interpret and explain causal relationships in the social world. Humans have a need to understand why things happen. From observing other people's actions, people make inferences about intention and responsibility. People tend to make an attribution about behaviour depending on whether they are performing it themselves or observing somebody else doing it. This is known as actor-observer effect. Situational and dispositional factors are often used to explain behaviour at the sociocultural level of analysis. Attributing internal characteristics like personality, attitudes and beliefs as the reasons for people's behaviour is called dispositional attribution. The opposite of that is the situational attribution, which happens when we assign the reasons for people's behaviour to external factors, like social pressure and the immediate rewards and punishments in a specific social setting. In general, personality researchers tend to emphasize dispositional explanations whereas social psychologists show a preference for situational explanations. Attribution theory argues that people are more likely to explain another person's actions by pointing to dispositional factors, rather than to the situation. ...read more.

An impressive number of studies have supported that personality can be captured by someone's position on the scales of five measureable personality factors or traits represented in the table below. The five personality factors of the FFM by McCrae and Costa (1999) and some of the characteristics of low and high scores FFM factor Low scores are: High scores are: Neuroticism Relaxed, even-tempered Emotional, moody, impulsive Extraversion Reserved, serious, passive Outgoing, active, sociable Openness to experience Down-to-earth, practical Imaginative, creative Agreeableness Hostile, selfish, cold Kind, trusting, warm, altruistic Conscientiousness Easy-going, unreliable, sloppy Organized, tidy, striving The FFM offers the basis of valid predictions both in research settings and in everyday life settings. Ozer and Benet-Martinez (2006) have reported that personality, as captured by the FFM, relates to several real-life outcomes, thus being high in ecological validity. Therefore, dispositions in the form of personality factors emerge as significant determinants of behaviour and should be taken into account when trying to explain behaviour. The claim is not that personality is in general the most important determinant of behaviour, much less that we can predict with great accuracy how a particular individual will behave in a specific situation. ...read more.

The results can also be viewed in terms of what Mischel identified as a strong situation. According to him strong situations are powerful enough to suppress individual differences. Weak situations allow for more personality influences on behaviour. In Asch's (1951, 1956) study, the participants had to estimate the lengths of lines in comparison to three options in a room with other participants who were actually the confederates of the experimenter and gave wrong answers to see if the real participant would conform. Asch's results showed that many of the participants conformed and explained it with trying "to avoid criticism and social disapproval." These experiments portray that situational factors play at least as important of a role in determining behaviour as dispositional factors do. Bandura's social-cognitive perspective on personality emphasizes the interaction of traits and situations. Bandura (1986, 2006) views the person-environment relationship in terms of reciprocal determinism, which suggests that personality and environment interact in several ways that often determine each other. In this sense, we are both influenced by and design the environments we inhabit. Most psychologists nowadays espouse some form or other of interactionism and accept that dispositions and situations co-determine behavior. Our task is not to ignore one and focus on the other, but to appreciate and understand the interplay between the two. ?? ?? ?? ?? ...read more.