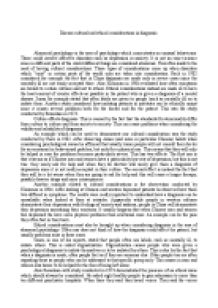 Discuss cultural and ethical considerations in diagnosis of abnormal psychology.

﻿Discuss cultural and ethical considerations in diagnosis. Abnormal psychology is the area of psychology which concentrates on unusual behaviours. These could involve affective disorders such as depression or anxiety. It is not an exact science since in different parts of the world different things are considered abnormal. This often leads to the need of having cultural considerations. These types of considerations come up when disorders which ?exist? in certain parts of the world only are taken into consideration. Rack in 1982 considered for example the fact that in China diagnosis are made only in severe cases since the mentally ill are not easily accepted there. Also Kleinman in 1984 evaluated how often symptoms are bound to certain cultures and not to others. Ethical considerations instead are made so to have the least amount of counter effects as possible in the patient who is given a diagnosis of a mental disease. Szasz for example stated that often labels are given to people (such as mentally ill) ...read more.

The second effect is instead the fact that they will be a lot worse when they are going to ask for help and this will cause a longer therapy, possibly heavier drugs and more consequences. Another example related to cultural considerations is the observation conducted by Kleinman in 1984. After looking at Chinese and western depressed patients he observed how these two differed in symptoms. The results were really important to understand how a diagnosis can be unrealiable when looked at from at outsider. Apparently while people in western cultures demonstrate their depression with feelings of anxiety and sadness, people in China will demonstrate their depression somatizing their emotions. It usually happens that when Chinese men and women feel depressed the have more physical problems than emotional ones. An example can be the pain they often feel in their back. Ethical considerations must also be brought up when considering diagnosis in the area of abnormal psychology. Often one does not think of how the diagnosis could affect the patient, but usually problems arise in these cases. ...read more.

When they got diagnosed schizophrenia they were asked to remain in observation in the hospital. After entering they started saying they felt fine. One of them was kept under observation for other fifty-two days. This is caused by the fact that patients in institutions are regarded as having something for the simple reason they are in there. This was also shown by the fact that the behaviour of the actors was always considered as representing the schizophrenic behaviour, even when it was something as simple as walking through the corridors for boredom. It is possible to try lowering the levels of the issues caused by culture and ethics. Several ?guides? to psychological diseases were created so that when someone is diagnosed based on that ?guide?, it will maintain its diagnosis throughout all the world. Instead for ethical purposes now diagnosis are given in a less drastic way. Instead of being schizophrenic, for example, a person is considered to have ?schizophrenic behaviour?. Even if decisions to get the situation better are made very often by psychologists interested in it, many other issues are still to be considered while diagnosing a mental disease. ...read more.