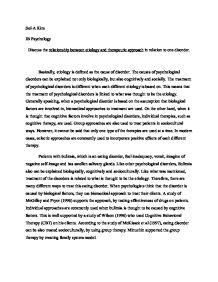 Discuss the relationship between etiology and therapeutic approach in relation to one disorder.

It was also turned out that reduction of binge biting and vomiting, which are behavioral symptoms, were resulted because of higher intake of the drug. The study of McGilley and Pryor clearly explains effectiveness of biomedical approaches on bulimia, and there are nothing wrong. The US Food and Drug Administration allowed the researchers to use of SSRI for the treatment of bulimia nervosa based on such studies. Also, data of the study was fully published in 1992, and confidentiality of the clients was kept. In addition, this study is reliable, since it was successful replicated by Goldstein et al in 1995. He found that Prozac reduced binge eating 51 percent, whereas only 17 percent of patients who received placebo reduced the symptom. Individual therapy, especially Cognitive Behavioral Therapy (CBT), is the most widely used when treating bulimia nervosa. The therapy stresses the importance of cognitive aspects in bulimia, such as dichotomous thinking and obsession with body weight. By confronting with a psychologist, the patients tell specifically about their eating patterns, their feeling about it. ...read more.

Moreover, it is cost effective, compared to individual therapy. The group therapy suggested by McKisack et al in 1997 was further supported by family system model established by Minuchin. The model states that dysfunctional behavior of individuals is basically caused by dysfunction within the family. By using family therapy, the psychologist tried to form family system again along healthy lines. As can be seen from the above studies and research findings, treatment of bulimia nervosa can be varied. It has been shown that treatment of the eating disorder is linked to what was thought to be etiology. Not only biomedical treatment, but also cognitive behavioral therapy and group therapy can be used for each different types of etiology. However, one certain thing is that we cannot be reductionist. We have to take into consideration all sociocultural, biological and cognitive factors. Likewise, causes of bulimia nervosa can be complex, and people benefit from the each different types of treatment. Therefore, eclectic approach, which is to treat patients not only biologically but also cognitively and socially, may be more effective to treat the eating disorder. ?? ?? ?? ?? ...read more.