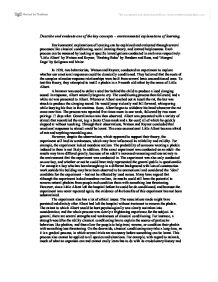 Describe and evaluate one of the key concepts - environmental explanations of learning. Environmental explanations of learning can be explained and evaluated through several processes like classical conditioning, social learning theory, and learned helplessness. Each process can be assessed by looking at specific investigations conducted in each area respectively: 'Little Albert' by Watson and Rayner, 'Bashing Bobo' by Bandura and Ross, and 'Mongrel Dogs' by Seligman and Maier. In 1920, two behaviorists, Watson and Rayner, conducted an experiment to explore whether our emotional responses could be classically conditioned. They believed that the roots of the complex stimulus-response relationships were built from several basic unconditioned ones. To test this theory, they attempted to instill a phobia in a 9-month old infant by the name of Little Albert. A hammer was used to strike a steel bar behind the child to produce a loud clanging sound. In response, Albert naturally began to cry. The conditioning process then followed, and a white rat was presented to Albert. Whenever Albert reached out to touch the rat, the bar was struck to produce the clanging sound. He would jump violently and fall forward, whimpering while burying his face in the mattress. Soon, Albert began to withdraw his hand whenever the rat came near him. The process was repeated five times more in one week, followed by two more pairings 17 days after. ...read more.

The children's exposure to an adult's aggression might even be seen as abuse as their violence may have frightened the children. In addition, the children knew the Bobo doll was not a real person so they may have allowed themselves to express their aggression toward the doll. If a real person had been used, the results may have been significantly different. In addition, the children may not have meant to express aggression, and may have solely viewed the punching and kicking of the Bobo doll as another way to play with toys. With regard to the result of the boys showing more aggression than the girls, this result could have been closely related to the cultural context the boys grew up in. For instance, in the western culture where men have the expectation of needing to be good fighters, the researchers themselves may have already thought that boys would be more aggressive than girls, which could possibly have influenced their observations. The boys themselves may have been influenced by this cultural expectation, which caused them to be more aggressive than the girls. In addition, there is little ecological validity. For instance, the model used was a stranger; it would be very uncommon for children to be alone with strangers since much of their childhood would be spent surrounded by people they know who will give their insights on whatever is happening. ...read more.

Seligman and Maier's work may provide valuable insights into the phenomenon of institutionalization for instance. For example, people who stay in hospitals and residential units for a long time appear to lose their individuality. This might occur because their lives are so strictly controlled, with very little room to make their own decisions. Their work could help us understand how to avoid, inhibit, and reverse this process. In conclusion, environmental explanations of learning like classical conditioning, social learning theory, and learned helplessness has its advantages and disadvantages. A disadvantage is that the methods in which the result is obtained is usually a long process. In addition, the method used to generate these environmental explanations of learning frequently poses several ethical issues, which may inflict long-term psychological and physical damage. Samples used are also not likely to be representative of the general public in terms of culture, gender, and lots of other factors, which may impact its ecological validity and mundane realism. Assumptions based on the results, which have not been tested are also made which may not necessarily work in real life (eg: Little Albert and the ability to take away phobias). However, on the lighter note, the results of these explanations are applicable to a wide range of behaviors, which can be used to reverse, explain, or inhibit undesired behaviors, and encourage other desired behaviors. Environmental explanations of learning also look at both cognitive and behaviorist aspects of learning. ...read more.