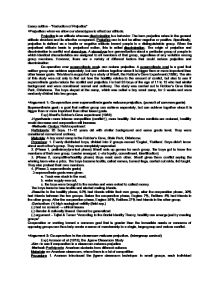 Essay outline - "Reduction of Prejudice" ?Prejudice: when we allow our stereotypes to affect our attitude. Prejudice is an attitude whereas discrimination is a behavior. The term prejudice refers to the general attitude structure and its affective component. Prejudice can in fact be either negative or positive. Specifically, prejudice is defined as a hostile or negative attitude toward people in a distinguishable group. When the prejudiced attitude leads to prejudiced action, this is called discrimination. The origin of prejudice and discrimination is conflict and stereotype. A stereotype is a generalization about a particular group of people in which identical characteristics are assigned to all members of that group, regardless of any variation among group members. However, there are a variety of different factors that could reduce prejudice and discrimination: Co-operation over superordinate goals can reduce prejudice. A superordinate goal is a goal that neither group can achieve separately, but can achieve together since it is bigger than or more important than other lesser goals. This idea is supported by a study of Sherif, the Robber's Cave Experiment (1958). The aim of this study was not only to find out how the hostility relates to the amount of conflict, but also to see if superordinate goals reduce the conflict and prejudice. He had 20 boys of the age of 11 to 12 who had similar background and were considered normal and ordinary. The study was carried out in Robber's Cave State Park, Oklahoma. The boys stayed at the camp, which was called a boy scout camp, for 3 weeks and were randomly divided into two groups. ?Argument 1: Co-operation over superordinate goals reduces prejudice. ...read more.

-Methods: Design: experiment Participants: a class of 3rd grade students in Riceville, Iowa. Procedure: a class teacher called Jane Elliott tried 1. She told her class that the brown-eyed children would be the ruling class for the day, and the blue-eyed children were to be kept in their place. Ingroup and outgroup were formed, and the blue-eyed children began to do badly in their school work quite quickly, and became depressed. 2. The next day Elliott told the children that she had lied, and that it was the blue-eyed children who were the ruling class, so the brown-eyed were inferior. The ingroup and outgroup were reversed, and the brown-eyed children quickly discriminated against. 3. She debriefed the children and explained to them the idea that if they had experienced prejudice and discrimination, they would not be so likely to be prejudiced themselves. Result: Children learned how negative discrimination is. The children on top did better academically, and the children on the bottom did badly. Years later, the students were brought back together. They said that the experience helped a lot in changing their stereotypes and their behavior toward stereotypical people. Evaluation: (+) Reduces discrimination, prejudice (-) High ecological validity, nothing artificial, happened in real life (-) can be generalized, many replications made Weber and Crocker (1983) Proposed three possible models for revising stereotypical beliefs: -the bookkeeping model, wherein each piece of disconfirming information modifies the stereotype -the conversion mode, wherein the stereotype radically changes in response to a powerful piece of information and -the subtyping model, wherein new subtype or subcategory stereotypes are created to support the disconfirming information. Exp: Aim: to test each of the models -subjects were presented with information that disconfirmed their stereotypes about two occupational groups: librarians and corporate lawyers. ...read more.

After the participant responded, the confed. on the tape stuttered badly and sounded as if he were having a seizure: � "I could really-er-use some help so if somebody would-er-give me a little h-help-uh-er-er-er-er..." � - Latane and Darley measured percentage of students in each group who left their cubicle and notified the experimenter; also the amount of time it took - ppt. given 4 minutes to respond Results: � 2-people group: 85% responded and reported the seizure in less than one minute � 6-people group: 31% responded and it took longer than 3 minutes Conclusion: � Ppts' response to emergency was strongly affected by size of the group � The more bystanders in a situation, the less likely the victim will be helped => bystander effect Evaluation of experiment: Limitations: - Unethical (ppts were deceived, no informed consent) - All ppts were college students - Questionable eco. validity - students comm. through intercom system, whereas in real-life you would see the person in need of help - Cultural differences Strengths: - Illustrated the bystander effect - Well-planned procedure - Good control Evaluation of Theory: (+) lot of evidence, less abstract (+) Reliable, replicated and obtained similar results, done extensively and accurately (+) Lesson to assess situation and decide well (-) Population sample, all college students (+/-) High ecological validity: real life situation, low ecological validity: artificial, used intercom system. (-) Situational influences might have applied and affected the result. Ex) having an ally: if there is an ally, one is more likely to act similar, cost benefit: if one concluded that a certain action of helping ensued more benefit, more likely to help, entrapment (smoke study) and other experimental environment might have affected result. ?? ?? ?? ?? ...read more.