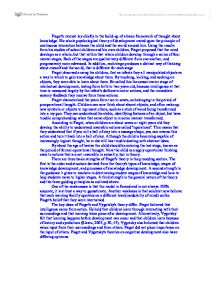 Piaget's interest lay chiefly in the build-up of a basic framework of thought about knowledge. His whole psychological theory of development rested upon the principle of continuous interaction between the child and the world around him. Using the results from his studies of school children and his own children, Piaget proposed that the mind develops as a whole, but that within that whole children develop through a series of four mental stages. Each of the stages are qualitatively different from one another, and progressively more advanced. In addition, each stage produces a distinct way of thinking about oneself and the world, that is different for each stage Piaget observed among his children, that as infants they all manipulated objects as a way in which to gain knowledge about them. ...read more.

They can understand the stable, identifying features of an object, but have trouble comprehending when that same object is in some manner transformed. According to Piaget, when children are about seven or eight years old they develop the ability to understand reversible actions called "operations". This means that they understand that if you roll a ball of clay into a sausage shape, you can reverse this action and turn it back into a ball of clay. Although the child is becoming capable of increasingly logical thought, he or she still has trouble dealing with abstract ideas. By about the age of twelve the child should be entering the last stage, known as the period of formal-operational thought. Now the child can apply operational thinking even to actions that are not reversible in actuality, but in theory. ...read more.

One of the weaknesses is that the model is flawed and is not always 100% accurate, it is at best a way to guesstimate. Another weakness is that scientist now believe that each learning facility operates on a different level(modularity of mind) unlike Piaget's belief that they were intertwined The key ideas of Piaget's and Vygotsky's theory differ. Piaget believed that intelligence came from action. He held that children learn through interacting with their surroundings and that learning takes place after development. Alternatively, Vygotsky felt that learning happens before development can occur and that children learn because of history and symbolism (Slavin, 2003, p.30, 43). Vygotsky also believed that children value input from their surroundings and from others. Piaget did not place importance on the input of others. Piaget and Vygotsky's theories on cognitive development also have differing opinions. ...read more.