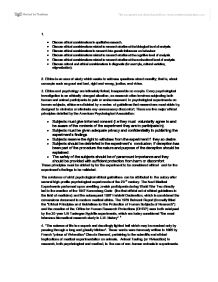 Whether she is intentionally lying or suffering from stress-induced hysteria, it is verging on ridiculous to accept her claims that her limbs were manually dislocated to enforce a sense of helplessness or that doctors sexually assaulted her and applied electrical shock to her genital region. A quick internet search for "MKULTRA survivor testimonies" will reveal several other, usually older female, individuals who claim that MKULTRA was among other things a front for an international prostitution ring and secretly led by the Illuminati. For most people emerging from the MKULTRA programs, the problems they legitimately faced were seeking legal support or compensation for a program that, according to the government, never existed. Often their outcries were hushed by government officials or brushed aside as paranoia by the media, at it is only after the high-profile investigation into MKULTRA that these people are finally getting their claims heard and understood. For many of these individuals, as a result of taking part (voluntarily or otherwise) in these experiments they experienced disillusionment in the Government, as they began to question the moral aptitude of a leading body that would intentionally inflict such stress and trauma upon its own subjects. Regardless of some potentially exaggerated claims, the fact remains that MKULTRA was a highly unethical programme based upon the involuntary involvement of innocent participants, and a dark time in American Psychological history. 6/7.The Milgram Experiment on obedience to authority figures began in July 1961, and were a series of social psychology experiments lead by Yale University Psychologist Stanley Milgram. The experiments were intended to measure the willingness of study participants to obey an authority figure who instructed them to perform acts that conflicted with their personal moral code. ...read more.