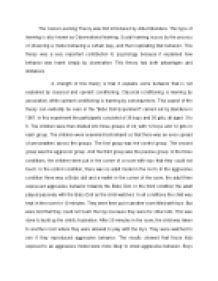 ﻿The Social Learning Theory was first introduced by Albert Bandura. This type of learning is also known as Observational learning. Social learning occurs by the process of observing a model behaving a certain way, and then replicating that behavior. This theory was a very important contribution to psychology because it explained how behavior was learnt simply by observation. This theory has both advantages and limitations. A strength of this theory is that it explains some behavior that is not explained by classical and operant conditioning. Classical conditioning is learning by association, while operant conditioning is learning by consequences. This aspect of the theory can evidently be seen in the ?Bobo Doll Experiment? carried out by Bandura in 1961. In this experiment the participants consisted of 36 boys and 36 girls, all aged 3 to 6. ...read more.

But were told that they could not touch the toys because they were for other kids. This was done to build up the child?s frustration. After 20 minutes in the room, the child was taken to another room where they were allowed to play with the toys. They were watched to see if they reproduced aggressive behavior. The results showed that those kids exposed to an aggressive model were more likely to show aggressive behavior. Boys were three times more likely to show physically aggressive behavior than girls. This is because aggression from men is more socially accepted. Both the sexes showed an equal amount of verbal aggression. This study shows how the social learning theory can explain behavior learnt from observations. Another strength of this theory is that it has cognitive, cultural, and biological aspects involved in it. ...read more.

Another limitation is that although people observe behavior, it is not necessarily true that they will reproduce that behavior because they can think for themselves. This can be seen in a study carried out by Charleton (1995). Charleton wanted to see if children at St. Helena would become more aggressive if they were exposed to aggressive models on television. He brought television to the island, and the children watched the same amount of aggressive television programs as children in Britain. The results of this study showed that children did not behave more aggressively. This was because aggression was socially discourages at St. Helena, so they did not reproduce this behavior. This shows how although they observed aggressive behavior, they chose not to reproduce it. This basically goes against the social learning theory because according to the theory, if the children observed it, then they should have reproduced it. The social learning theory has several limitations and strengths. It was an important contribution by Albert Bandura, to explain behavior learnt by observation. ...read more.