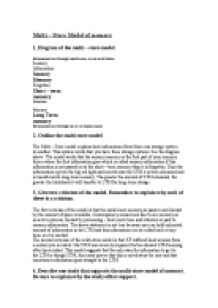 ﻿Multi ? Store Model of memory 1, Diagram of the multi ? store model Information lost through interference or retrieval failure Sensory Information Sensory Memory Forgotten Short ? term memory Attention Rehearsal Long Term memory Information lost through decay or displacement 2, Outline the multi store model The Multi ? Store model explains how information flows from one storage system to another. This system works that you have three storage systems. See the diagram above. The model works that the sensory memory is the first part of your memory this is where the first information goes which is called sensory information if this information is not passed on to the short ? term memory than it is forgotten. Once the information s given the big red light and moved onto the STM it is then rehearsed and is transferred to long-term memory. The greater the amount of STM rehearsal, the greater the likelihood it will transfer to LTM for long-term storage. 3, Give two criticism of the model. Remember to explain why each of these is a criticism. The first criticism of the model is that the model sees memory as passive and limited by the amount of space available. Contemporary researchers like to see memory as an active process, limited by processing ? how much time and attention is paid to sensory information. ...read more.

The central executive is a flexible system that can process information received by all the senses. It can hold information for a short time. Baddeley believed that it was the CE which resources the decision-making. It allocates resources to the other slave system depending on what the task is. The CE can also be thought of as the fat controller from Thomas the Tank engine it plays the same role as he does. The other three boxes are the slave systems. The first area is the articulatory loop. This area is a verbal rehearsal loop this holds words, which we are just about to use though speaking. The information is represented as it would be spoken, hence the ?inner voice?. The loop works in about two seconds. The second area is the phonological store this is also known as the ?inner ear?. This area receives auditory information and stores it an acoustic code. These two are related because they are both sound information. The third area is the visuo-spatial scratch pad (sketchpad). This area helps to rehearse visual or spatial information. It uses a visual code, analysing features in terms of colour, size and shape. This is why this is called the ?inner eye?. ...read more.

3,Give two criticism of the model. Remember to explain why each of these is a criticism. The first criticism of this model is that there are problems with measuring the depth of processing. The more deeply you process information, the better you remember. ________________ Use all the words listed below to complete the blanks in this review of why we might forget: In short-term memory, information may be forgotten because it is displaced by new information. Or perhaps the of the information may because it is not . The Atkinson and Schiffrin multi-store model suggests the amount of information and the process in which information is received may predict whether we remember it. The Craik and Lockhart model of memory suggests that the way we Information is important. This model proposes three levels of processing: structural, which is a shallow level of processing in which we focus on what information looks like; acoustic, in which we focus on what information sounds like; and semantic, which is the deepest level of processing. If we think about the meaning of information, the ,we are less likely to forget it. Psychologists have also suggested that we forget information held in LTM because learning with existing learning (this is interference). Sometimes we cannot remember information unless we have a meaningful which is called cue-dependent forgetting. ...read more.