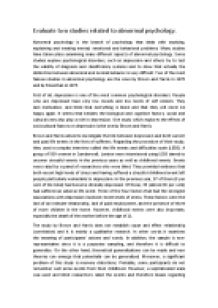 ﻿Evaluate two studies related to abnormal psychology. Abnormal psychology is the branch of psychology that deals with studying, explaining and treating mental, emotional and behavioral problems. Many studies have taken place examining many different aspects of abnormal psychology. Some studies explore psychological disorders, such as depression and others try to test the validity of diagnosis and classificatory systems and to show that actually the distinction between abnormal and normal behavior is very difficult. Two of the most famous studies in abnormal psychology are the ones by Brown and Harris in 1978 and by Rosenhan in 1973. First of all, depression is one of the most common psychological disorders. People who are depressed have very low moods and low levels of self esteem. They lack motivation, and think that everything is black and that they will never be happy again. It seems that besides the biological and cognitive factors, social and cultural ones also play a role in depression. One study which explores the effects of sociocultural factors on depression is the one by Brown and Harris. Brown and Harris aimed to investigate the link between depression and both current and past life events in the lives of sufferers. ...read more.

The finding that most people got depressed because there was something wrong with their in their lives and not due to their personality, totally transformed how depression was seen by general practitioners and psychiatrists in Britain. A main problem in abnormal psychology is the distinction between normality and abnormality and the validity of diagnosis of psychological disorders. There are many criteria which help psychiatrists to distinguish between abnormal and normal. Some of them are the statistical infrequency, the deviation from ideal mental health, the deviation from social norms and the failure to function adequately. However, each of these criteria has its own limitation. Regarding the validity of diagnosis of psychological disorders, it is important to say that the purpose of diagnosis is to identify a disorder and find the cause (etiology) and provide treatment (and maybe a prognosis). This procedure is typical within the medical world. However, it is more problematic in relation to psychological disorders as in many cases diagnosis is based on symptoms and not objective signs, and the classification systems are far from perfect. The classification systems are merely descriptive and meant at identifying certain disorders. ...read more.

This study is a strong evidence that there are problems regarding the validity of psychiatric diagnosis and that it is very difficult to distinguish normal from abnormal. This study had an enormous impact in psychiatry. It sparked off a discussion and revision of diagnostic procedures as well as discussion of the consequences of diagnosis for patients. The development of diagnostic manuals has increased validity and reliability. The method used raises ethical issues but it was justified since the results provided evidence of problems in diagnosis which could benefit others. There is strong deception and there were also serious ethical issues in the follow-up study since the staff thought that impostors would present, but they were real patients and may have not received the treatment they needed. In conclusion, it is certain that abnormal psychology is one of the most fascinating branches of psychology and many studies have taken place and will also take place in the future examining its phenomena. Brown and Harris and Rosenhan et al studies are only two of a number of studies which can characterized as breakthroughs and contributed to amazing changes in the area of psychology. ...read more.