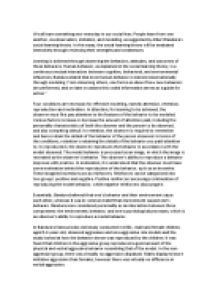 ﻿We all learn something new everyday in our social lives. People learn from one another, via observation, imitation, and modeling, as suggested by Albert Bandura?s social learning theory. In this essay, the social learning theory will be evaluated intensively through reviewing their strengths and weaknesses. Learning is achieved through observing the behaviors, attitudes, and outcomes of those behaviors. Human behavior, as explained in the social learning theory, is a continuous mutual interaction between cognitive, behavioral, and environmental influences. Bandura stated that most human behavior is learned observationally through modeling. From observing others, one forms an idea of how new behaviors are performed, and on later occasions this coded information serves as a guide for action.? Four conditions are necessary for effective modeling, namely attention, retention, reproduction and motivation. In attention, for learning to be achieved, the observer must first pay attention to the features of the behavior to be modeled. ...read more.

Bandura soon considered personality as an interaction between three components: the environment, behavior, and one?s psychological processes, which is an observer?s ability to reproduce a model behavior. In Bandura?s famous bobo doll study conducted in 1961, male and female children, aged 3-6 years old, observed aggressive and non-aggressive role models and the study looked at how the behavior shown was reproduced by the children. It was found that children in the aggressive group reproduced a good amount of the physical and verbal aggressive behavior resembling that of the model. In the non-aggressive group, there was virtually no aggression displayed. Males displayed more imitative aggression than females, however there was virtually no difference in verbal aggression. I believe Bandura?s bobo doll study to be methodologically flawed. Although a strong correlation between aggressive role models and children behaving aggressively due to imitation of role models was found, the children knew that they were meant to hit the doll before they started the experiment; hence this factor majorly affected the outcome of the study. ...read more.

He found that boys who were exposed to violent television when they were eight were more likely to get in trouble with the law as teenagers. When Eron and Huesmann returned to Columbia County in 1982 to further track the effect, the subjects were now 30 years old. They reported that those participants who had been more exposed to violence on television as eight-year-olds were more likely, as adults, to be act aggressively, for example, being convicted of serious crimes, using violence to discipline their children, and treating their spouses aggressively. Although these findings can helps explain how behavior can be passed on without trial-and-error learning, they also show that behavior can be acquired but not demonstrated, which makes it difficult to establish whether or not behavior is a result of socially learned behavior. Furthermore, these studies cannot explain why some people never learn a behavior despite meeting all four conditions involved in social learning, namely observation, retention, motor reproduction and motivation. In conclusion, I believe that the limitations of the social learning theory outweigh that of its strengths. ...read more.