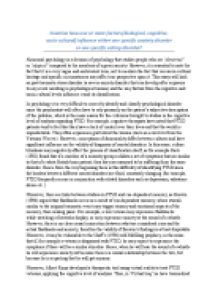 Examine how one or more factors (biological, cognitive, socio-cultural) influence either one specific anxiety disorder or one specific eating disorder?

﻿Examine how one or more factors (biological, cognitive, socio-cultural) influence either one specific anxiety disorder or one specific eating disorder? ________________ Abnormal psychology is a division of psychology that studies people who are ?abnormal? or ?atypical? compared to the members of a given society. However, it is essential to note the fact that it is a very vague and ambivalent term, not to mention the fact that our socio-cultural heritage and specific circumstances may affect our perspective upon it. This essay will look as post-traumatic stress disorder (a severe anxiety disorder that can develop after exposure to any event resulting in psychological trauma) and the way factors from the cognitive and socio-cultural levels influence it and its classification. In psychology it is very difficult to correctly identify and classify psychological disorder since the psychiatrist will often have to rely primarily on the patient?s subjective description of the problem, which is the main reason for the criticisms brought to studies in the cognitive level of analysis regarding PTSD. For example, cognitive therapists have noted that PTSD patients tend to feel that they have a lack of control over their lives and that the world is unpredictable. They often experience guilt about the trauma (such as a survivor from the Vietnam War etc). However, conceptions of abnormality differ between cultures and have significant influence on the validity of diagnosis of mental disorders. ...read more.

This perhaps identifies a correlation between the two, but again there is no evidence of a causal relationship between sense of purpose and diminished chance of suffering from PTSD. Moreover, Suedfeld?s (2003) study on the attributional patterns of Holocaust survivors found that it tends to be more external, that is God luck or fate and although mentions of help from others were prominent in the study, survivors nevertheless have low trust in others and demonstrate a skeptical view of the world). While this may have some validity, it should be questioned whether the results were due to the fact that were interviewed groups were Jewish (in which case this could be more about socio-cultural factors than cognitive ones). Some other disadvantages would be the fact that interviews and questionnaires were used which, like many evaluation methods occur after the event, so participants may forget important issues. Also, they are standardised so it is not possible to explain any points in the questions that participants might misinterpret. Respondents may answer superficially especially if the questionnaire takes a long time to complete. The participants may not have been willing to answer the questions. They might not wish to reveal the information or they might think that they will not benefit from responding perhaps even be penalised by giving their real opinion. Students should be told why the information is being collected and how the results will be beneficial. ...read more.

These studies however do not provide robust evidence which the biological level does. For example, Geracioti (2001) found that PTSD patients had higher level of noradrenaline than the average and that stimulating the adrenal system in PTSD patients induced a panic attack in 70 % of patients and flashbacks in 40% patients. Also, twin studies may be used, but the biological level overlooks the fact that environmental factors may play a part in the development of the individual (the nature vs. nurture debate).While the study clearly outlines the symptoms of PTSD and the way they develop and manifest, it cannot establish a causal relationship between the two. Also, the biological level generally is vulnerable to criticism of being reductionist, limitative and quite rigid. In conclusion, while there are numerous controversies regarding the topic of abnormality and the methods used to classify mental disorders (and even to find suitable definition for those mental disorders), there is no doubt the three levels of analysis, the biological, the cognitive and the socio-cultural, have all had their role in influencing the way PTSD is identified, classified and perceived. Even if there will be no ultimate answer to these questions and even our own socio-cultural heritage and specific circumstance will impede the achievement of an objective, detached view, a close, comprehensive study of the symptoms, cause and effects of PTSD will help us better understand it so that we can device more effective therapeutic treatments to it. ...read more.