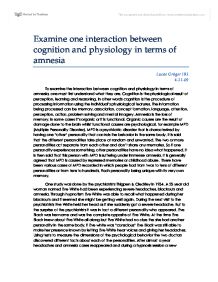 Examine one interaction between cognition and physiology in terms of amnesia

Examine one interaction between cognition and physiology in terms of amnesia Lucas Gr�ger IB1 4-11-09 To examine the interaction between cognition and physiology in terms of amnesia, one must first understand what they are. Cognition is the physiological result of perception, learning and reasoning. In other words cognition is the procedure of processing information using the individual's physiological features. The information being processed can be memory, association, concept formation, language, attention, perception, action, problem solving and mental imagery. Amnesia is the loss of memory. In some cases it's organic or it is functional. Organic causes are the result of damage done to the brain whilst functional causes are psychological, for example MPD (Multiple Personality Disorder). MPD is a psychiatric disorder that is characterized by having one "other" personality that controls the behavior in the same body. It is said that the different personalities take place at random and unwanted. The two or more personalities act separate from each other and don't share any memories. So if one personality experiences something, other personalities have no idea what happened. It is then said that this person with MPD is suffering under immense amnesia. ...read more.

if Eve white was "conscious" Eve Black was still able to make her presence known by letting Eve White hear voices and giving her headaches. Using tests to measure the dimensions of the psychological behavior the two doctors discovered different facts about each of the personalities. After almost a year headaches and amnesia cases reappeared and during a hypnosis session a new personality appeared. She called herself Jane and was clearly the most mature out of the three. It seemed as if Jane was a balance of Eve White and Black. Eve white had several symptoms that were derived from MPD. She had severe headaches, blackouts over a period of time where she couldn't remember a thing, voices and dizziness. Eve White's greatest worry was her amnesia. But we cannot fully rely on the data because it was gathered over 50 years ago when studies were primitive. We cannot be sure if hypnotism really worked, all the information could have been biast which would make nothing reliable and therefore not a good example. ...read more.

The weakness is that the scientists tested only using a movie to see whether the brain will suppress the memory about it when it is ordered to so. They could have watched the movie without interest and that is the reason why they did not recall all the parts of it. They should have tested their hypothesis using other methods to make sure the date is reliable. The effects of cognition on our physiology are quite significant. The memories of bad experiences can haunt us and damage the quality of our life. Our subconscious can put us in a hypnotic state in which we cannot feel any pain or trauma. By doing so we have no memory of whatever just has happened to us. Therefore we recall that we blacked out and suffer under amnesia when in fact our brain moved or deleted the memory so that it cannot hurt us or traumatize us. "Dissociative Identity Disorder (DID) Causes, Symptoms, Signs, Diagnosis and Treatment by MedicineNet.com." Web. 04 Nov. 2009. <http://www.medicinenet.com/dissociative_identity_disorder/article.htm>. "AS Psychology." AS Psychology holah.co.uk. Web. 03 Nov. 2009. <http://www.holah.karoo.net/thigpenstudy.htm>. ...read more.