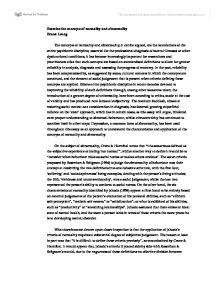 Examine the concepts of normality and abnormality Ernest Leung The concepts of normality and abnormality, it can be argued, are the foundations of the entire psychiatric discipline; essential for the professional diagnosis of mental illnesses or other dysfunctional conditions, it has become increasingly important for researchers and practitioners alike that such concepts are based on standardised definitions to allow for greater reliability in analysis, diagnosis and assessing the progress of recovery. In the past, reliability has been compromised by, as suggested by some, cultural contexts in which the concepts are construed, and the element of social judgement that is present when criteria defining these concepts are applied. Efforts of the psychiatric discipline in recent decades devoted to improving the reliability of such definitions through, among other measures taken, the introduction of a greater degree of universality, have been according to critics, made at the cost of validity and has produced new forms of subjectivity. The resultant backlash, aimed at restoring social context as a consideration in diagnosis, has fostered growing superficial reliance on the 'emic' approach, which has in certain cases, as this essay will argue, hindered even proper understanding to abnormal behaviour, whilst ethnocentricity has continued to manifest itself in other ways. Depression, a common form of abnormality, has been used throughout this essay as an approach to understand the characteristics and application of the concepts of normality and abnormality. On the subject of abnormality, Crane & Hannibal wrote that "it is sometimes defined as the subjective experience of feeling 'not normal'", whilst another way to define it would be to "consider when behaviour violates social norms or makes others anxious". The seven criteria proposed by Rosenhan & Seligman (1984) to judge the abnormality of behaviour was their attempt at combining the two definitions into one cohesive structure, with the first four, 'suffering' and 'maladaptiveness' being examples, dealing with the person's living attitudes; the fifth, 'vividness and unconventionality', was a social judgement; whilst the last two represented the person's ability to conform to social norms. ...read more.

What are the problems with Horwitz's argument? It would seem that Horwitz, having drawn a distinction between normal and abnormal sadness, has come to the implicit conclusion that it would be unwise for conditions capable of self-healing, and thus a 'normal form of misery' to be labelled as abnormal and then medicated or subject to psychotherapy. What he has not explained is why this 'trajectory of adaptation' in a 'normal condition' of sadness should not be accelerated, or assisted, with the use of professional treatment; in view of the rapid pace of life in many societies, it may in fact be beneficial for the person in question to be restored to emotional stability as soon as possible - and here an example of how social context affects methods of psychological treatment can be seen. However it is upon the presumption of the existence of such a 'trajectory of adaptation' that the concept of normality and abnormality were forged and applied by Horwitz and other psychologists. He admits that the balance between over-intervention and under-treatment can only be reached if a 'conceptually valid approach to the distinction between disorder and non-disorder' can be formulated. How valid, then, is the concept of normality based on the existence of the trajectory? The endorsement of this concept, by DSM-III, was recognition of several underlying culturally-based principles and definitions: First, Horwitz indicated that 'two months' was seen as an appropriate duration of time in which the coping mechanisms should be able to return the person back to a state of normality. It is unclear whether this was a culturally or scientifically based judgement, but there certainly exist cultures which expect extended mourning, and in conservative Catholic societies up 'til the early 20th century, families who have lost their members may be required to observe mourning by specific dress codes or behaviours for years, and this would undoubtedly have an effect on the psychology of those individuals. ...read more.

The threshold for what is considered infrequent - the 2.5% mark on either side of the bell curve - is also questionable in the sense that a percentage minority taken to a larger perspective would yield a statistically significant number, certainly in the millions if it is the worldwide population that is being examined. Thus statistics are only useful as an assisting tool to assess the dispersion of results in a population for nomothetic studies. A statistical abnormality is not the equivalent of an abnormality in the psychiatric sense. The evolution of the concepts of normality and abnormality signify a few things. First was the realisation of the fact that social context exert an influence over such concepts, and it was the element of subjective, social, value judgement which inhibited the reliability of socially-based diagnostic criteria ranging from Jahoda, to Rosenhan & Seligman, to psychoanalytic-based DSM-II. Secondly was the acknowledgement of the problems arising from external perception of a person's inner workings. These two factors produced a reaction culminating in the creation of a context-removed, theory-neutral DSM-III which was praised for its reliability and universality, but accused of being severely compromised in terms of concept validity. Thus the concepts of normality and abnormality was until the discrediting of the DSM-III being revised in the hope of improving its reliability in practice and universal applicability for different theories, at the cost of considerations of social context and proportionality between triggering event and reaction, which were of paramount importance to previous generations of psychiatrists. This was the basis of Horwitz's condemnation of DSM-III regarding concept validity. However the line of distinction draw between what is considered 'normal sadness' and 'depressive disorder' and which Horwitz adopted for his argument, was based on cultural assumptions manifesting themselves in the theory of the 'trajectory of adaptation'. Thus it was a cultural concept instead of an objectively scientific one which Horwitz took up to accuse the DSM-III of its deficient concept validity. ...read more.