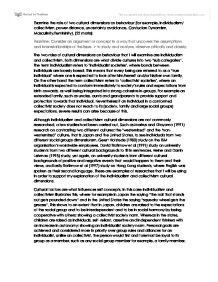 Examine the role of two cultural dimensions on behaviour.

Examine the role of two cultural dimensions on behaviour (for example, individualism/ collectivism, power distance, uncertainty avoidance, Confucian Dynamism, Masculinity/femininity). [22 marks] Examine: Consider an argument or concept in a way that uncovers the assumptions and interrelationships of the issue. > to study and analyze, observe critically and closely. The two roles of cultural dimensions on behaviour that I will examine are individualism and collectivism. Both dimensions are what divide cultures into two "sub categories". The term individualism refers to 'individualist societies', where bonds between individuals are loosely based. This means that every being are referred to as a 'true individual' where one is expected to look after him/herself and/or his/her own family. On the other hand the term collectivism refers to 'collectivist societies', where an individual is expected to conform immediately to society's rules and expectations from birth onwards, as well being integrated into strong cohesive in-groups. For example an extended family, such as uncles, aunts and grandparents to provide support and protection towards that individual. Nevertheless if an individual in a conformed collectivist society does not reach to its (society, family and large social groups) expectations, severe results can arise because of this. Although individualism and collectivism cultural dimensions are not commonly researched, a few studies had been carried out. ...read more.

This emphasises that different countries has different cultural views, thus leads to different cultural orientations, whether individualism or collectivism societies. Individualism and collectivism can deeply motivate and change one's self concept and views, since it's so engraved into a culture and thus moulds one's self conception and identity. This is shown by Markus and Kitayama (1991) research on western cultures and eastern cultures. From the results North Americans and Europeans tends to show an independent view of them self, such as "the only person you can count on is yourself" and "I enjoy being unique and different from others", in contrast to the Asians, Africans and Latin Americans, showed an interdependent view of them self, for example "I'm partly to blame if one of my family members or co-workers fails" or "my happiness depends on the happiness of those around me". Generally the westernized cultured people (north Americans and Europeans) held themselves as an entity which are distinct, autonomous, self-contained and invests with their unique self qualities (all to which shows of independent views), whereas the non-westernized cultures showed qualities of interdependent views, by commenting on their belonging to a large social group network that one is socially connected, e.g family, co-workers etc. ...read more.

This shows that perhaps in westernized culture only thinks of their personal goals and what they want to attain in positively in life, unlike non-westernized culture thinks as a 'group' and what conditions is threatened to them as a whole. Another interesting point is language. Language can influence cultural behaviour, especially in a culturally diverse country and thus lead off to whether societies are individualists or collectivists. A research based on Hong Kong students (Trafimow et al 1997), where English was spoken as a second language, were given questions of "Who am I?" on half of the students were given it in Chinese (local language) and the other half in English (second language). The majority results shown that when asked in English, responses focused on personal traits increased, whereas asked in Chinese, responses focused on group affiliations traits. Thus emphasising that each of us has a potential of having both collectivist and individualist aspects (based on the usage and influence by language), as well as the situations we are in. In conclusion cultural influences on self conceptions can be attained in a number of ways, from one's cultural views to emotional perceptions to language, effecting on one's behaviour easily as well as their own cultural perception leading to their perception on own social groups. This can be seen through personal traits and group traits, affecting their beliefs and views. ...read more.