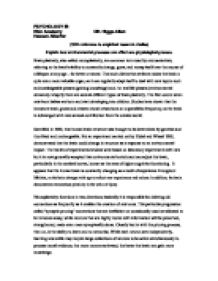 Explain how environmental processes can affect one physiological process.

PSYCHOLOGY IB RSA Academy DR. Higgs-Allen Hassan AlSaffar (With reference to empirical research studies) Explain how environmental processes can affect one physiological process. Brain plasticity, also called neuroplasticity, is a common term used by neuroscientists, referring to the brain's ability to constantly change, grow, and remap itself over the course of a lifespan at any age - for better or worse. That such distinctive attribute makes the brain a quite even more valuable organ, as it can regularly adapt itself to deal with new inputs such as knowledgeable phases (gaining knowledge) and / or real life phases (environmental demands). Majorly there are several different types of brain plasticity. The first occurs when new-born babies are born and start developing into children. Studies have shown that the immature brain grows and creates neural networks at an unparalleled frequency, as the brain is submerged with new sensual contribution from the outside world. Identified in 1965, that human brain structure was thought to be determined by genetics and thus fixed and unchangeable. ...read more.

The brain is formed by all experiences, whether positive or negative. Brain plasticity refers to the brain's ability to develop and form new connections as a result of experiences. Stimulation (or the lack of it) is known to influence number of neurons in the brain (dendritic branching) in the developing brain. Environmental stressors may influence the body's stress system and contribute to structural changes in the hippocampus, e.g. in relation with PTSD. Environmental stimulation refers to the way the environment provides stimulation in the form of social interaction and learning opportunities for animals and humans. Experiences are processed in the nervous system of the brain, and stimulating environments will result in increased numbers of synapses (brain plasticity). Gopnick et al. (1999) that an enriched environment is characterized by multiple opportunities to learn new things. Researchers have used animal models to study synaptic changes in the brain because it is not possible to use humans in deprivation experiments. Instead researchers use case studies of children who have grown up in total neglect, i.e. ...read more.

Since brain plasticity is assumed to follow the same pattern in animals and humans the implications of the study are that the human brain will also be affected by environmental factors such as intellectual and social stimulation. Evaluation and Conclusion The experiment was a thoroughly controlled and well organised laboratory experiment so it was possible to establish a cause-effect relationship. This experiment uses animals and therefore it might be difficult to generalize it on humans unless research with humans provides the same results. The research results have been replicated many times so it is now a well-established fact that an enriched environment provides a much better background for brain development than a poor environment. There are other ethical issues, such as in the use of animals in research like this. The rats in the IC were perhaps suffering from boredom but they were not harmed. The rats were killed after the test period in order to study changes in the brain. Since the results contributed to a much better understanding of the role of environmental factors in brain plasticity it can be argued that the research was justified in unkindness of the ethical issues. ...read more.