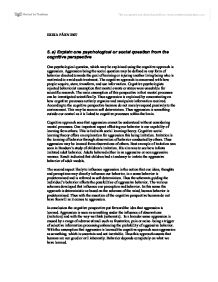 Explain one psychological or social question from the cognitive perspective

ERIKA P�RN IB07 6. a) Explain one psychological or social question from the cognitive perspective One psychological question, which may be explained using the cognitive approach is aggression. Aggression being the social question may be defined as any form of behavior directed towards the goal of harming or injuring another living being who is motivated to avoid such treatment. The cognitive approach is concerned with how people acquire, store, transform, and use information. Cognitive psychologists rejected behaviorist assumption that mental events or states were unsuitable for scientific research. The main assumption of this perspective is that mental processes can be investigated scientifically. Thus aggression is explained by concentrating on how cognitive processes actively organize and manipulate information received. According to the cognitive perspective humans do not merely respond passively to the environment. This may be seen as soft determinism. Thus aggression is something outside our control as it is linked to cognitive processes within the brain. ...read more.

Cognition explains that frustration results in many responses one of which being aggression. Already with the use of the word response frustration aggression hypothesis can be seen related with the learning perspective. With the behaviorist explanation on aggression it is obvious that direct reinforcement is seen as the trigger of aggression. Learning is defined as behavior through learned experiences. Modelling is another factor affecting the acquisition of aggressive behavior. Modelling is learning through imitation, observing a model being rewarded or punished for his/her behavior. Modeling and imitation was seen in the classic study of Bandura & Ross on children's imitation of adult models behaving aggressively or non-aggressively. In conclusion aggression can be explained with many approaches. With behaviorist and cognitive explanations it is evident that what ties these two perspectives is the determinism they both incorporate. The difference between cognitive and behaviouristic is that cognition seeks to explain reactions to aggression-eliciting stimuli and the way in which they pave way for aggressive responses where as behaviorism tends to understand aggressive behavior of an individual dependent upon direct reinforcement as well as observational learning. ...read more.