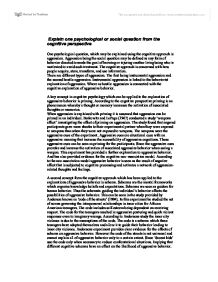 Explain one psychological or social question from the cognitive perspective

A second concept from the cognitive approach which has been applied to the explanations of aggressive behavior is schema. Schemas are the mental frameworks which organize knowledge beliefs and expectations. Schemas are seen as guiders for human behavior. Thus the schemata guiding the individual's behavior affects the possibilities of aggressive behavior. This can be seen in the study provided by Anderson known as 'code of the streets' (1994). In this experiment he studied the set of norms governing the interpersonal relationships in inner cities for African American teenagers. The code includes self-esteem being dependent on receiving respect. The code for the teenagers resulted in aggressive posturing and quick violent responses even to imaginary wrongs. According to Andersons study the inner city violence is due to the assumptions of the code. The code is a schema which these teenagers have adapted themselves and allow it to guide their behavior leading to inner city violence. ...read more.

Hostile aggression can be linked closely to cognition. Hostile aggression is motivated by the desire to express anger and hostile feelings. This desire for expression of hostile feelings can be further linked with frustration. The general aggression model is an integrative framework explaining how personal and situational input variables lead to aggressive behavior through cognitive appraisal. According to Anderson and Bushman aggressive responses depend upon a person's personality and situational constraints. GAM integrates cognitive social learning theory and cognitive neo-association theory. In conclusion aggression may be explained with cognitive key concepts such as schema and priming. Multiple experiments provide sufficient evidence for these explanations. Priming a key concept in the cognitive mental processes of the mind has been applied in the neo association model of aggressive behavior. Schema the second concept taken from the cognitive approach can be applied into explaining aggression with aggressive scripts and general aggression model. Generally the cognitive approach sees aggression depending upon the way we think (schemata and priming). ...read more.