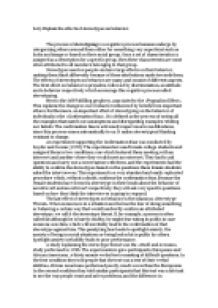 Explain the effects of stereotypes on behavior

﻿SAQ: Explain the effects of stereotypes on behavior. The process of sterotyping is a cognitive process humans undergo by categorizing others around them either for something very superficial such as looks and image or based on their social group. Once a set of characteristics is assigned as a description for a specific group, then these characteristis are most often attributed to all members belonging to that group. Stereotypes used on people can have large effects on their behavior, making them think differently because of these attributions made towards them. The effects of stereotypes on behavior are many and consist of different aspects. The first effect on behavior is prejudice, followed by discrimination, an attitude and a behavior respectively which encourage this cognitive process called stereotyping. ...read more.

They had to ask questions and carry out a conversation with them, and the experiments had the ability to confirm the stereotypes based on the questions these female students asked the interviewees. This experiment is a very standard and easily replicated procedure which, without a doubt, confirms the confirmation bias. Because the female students have formed a stereotype in their heads about the behavior of an introvert and an extrovert respectively, they will ask very specific questions based on how they think the interviewee is going to respond. The last effect of stereotypes on behavior is the infamous «Stereotype Threat». When someone is in a situation and he has the fear of doing something or behaving a certain way that would inadvertly confirm an attributed stereotype, we call it the stereotype threat. ...read more.

In the second condition they told similar participants that this test was a lab task to see the way people react and solve problems, and the difference in performance disappeared completely. This, along with a similar study by Spencer et. al. In 1977 which featured females solving a math test, confirms the stereotype threat. We can see that because of the stereotype that African Americans have created their own dialect and speak poor English, African Americans did actually perform bad because of fear of actually confirming this stereotype. As a result, it is easy to conclude that the effects stereotyping has on behavior are many and pivotal. It is essential to categorize them and be able to overcome the sources of these stereotypes, in order to hinder their formation and thus the effects on the receptors. ...read more.