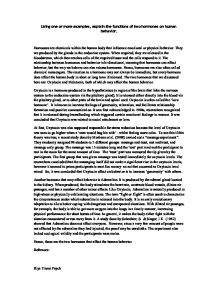 Explain the functions of two hormones on human behavior. Oxytocin and Adrenaline.

Using one or more examples, explain the functions of two hormones on human behavior. Hormones are chemicals within the human body that influence emotional or physical behavior. They are produced by the glands in the endocrine system. When required, they are released in the bloodstream, which then reaches cells of the required tissue and the cells respond to it. The relationship between hormones and behavior is bi-directional, meaning that hormones can affect behavior, but the way we behave can also release hormones. Hence, hormones are also often called chemical messengers. The reaction to a hormone may not always be immediate, but every hormone does affect the human body in short or long term if released. ...read more.

It was concluded that Oxytocin was related to social attachment or love. At first, Oxytocin was also supposed responsible for stress reduction because the level of Oxytocin was seen to go higher when a 'man would hug his wife' - whilst feeling more calm. To see this if this theory was true, a recent study done by Morhenn et al. (2008) carried out a "massage experiment". They randomly assigned 96 students to 3 different groups: massage and trust, rest and trust, and massage only group. The massage was 15 minutes long and the 'rest' part involved the participant to rest in the room for the same amount of time. ...read more.

It is an early evolutionary adaptation to allow better coping with dangerous and unexpected situations. With dilated air passages, for example, the body is able to get more oxygen into the lungs in a timely manner, increasing physical performance for short bursts of time. In general, it makes the body either fight with the situation encountered or run away from it. A study done by Schechter, S. & Singer, J.E. (1962) showed that Adrenaline does not affect everyone. However, since a very few amount of people were not affected by the adrenaline they had injected, the proof may be unreliable. The experiment also lacked ecological validity and the participants were males. Hence, these are the two hormones that affect the human behavior. Refrences : http://www.holah.karoo.net/schachterstudy.htm Peterson Book Psychology IB Riya Tiwari Psych ...read more.