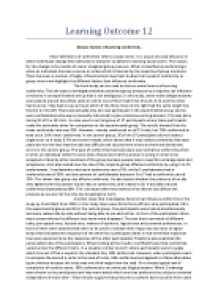 ﻿Learning Outcome 12 ________________ Discuss factors influencing conformity. Most definitions of conformity refer to social norms. It is a type of social influence in which individuals change their attitudes or behavior to adhere to existing social norms. The reason for the change is the results of real or imagined group pressure. What is classified as conforming is when an individual chooses a course or action which is favored by the majority of group members. There has been a number of highly influential and important studies that research conformity to group norms and highlight the different factors that influence conformity. The Asch study can be used to discuss some factors influencing conformity. The aim was to investigate whether perceived group pressure by a majority can influence a minority in an experimental set-up that is not ambiguous. In this study, seven male college students were placed around two white cards on which one of them had three lines (A, B, C) and the other had one line. They had to say out loud which of the three lines on the right had the same length has the line on the left. ...read more.

In this study there were 90 air force officers who participated, 50 in the experimental group and 40 in the control group. Five participants were tested simultaneously and were seated side by side without being able to see each other. In front of the participants there was a screen where the different test items were displayed. The test items consisted of different tasks; perceptual ones, factual ones, matters of opinions, logical ones and personal preferences. In front of them were switches that were to be used to indicate their responses and rows of signal lamps that indicated the responses of the other four participants (that in real were fake responses that were assumed to be the responses of the other participants). Finally he also examined the personality traits of the participants. When looking at the results, Cruthfield found that conformity varied across the different items. In a situation similar to Asch? where participants were to judge which line out of five is equal to the standard line, 30% conformed. However, when participants were to compare the area of a circle to the area of a star, 46% conformed and agreed to a false alternative (quite obvious because the circle was one third larger than the star). ...read more.

All of these studies have some ethical issues because the participants were deceived with the presence of confederates and fake answers; however the deception was not that serious. In the Asch study, the participants were ?? to psychological stress as they were in an uncomfortable situation. Also, all of these studies are laboratory experimental which, even though it controls the variables well, lowers the ecological validity. In comparison to the Asch and Berry study, the Crutchfield study can be best connected to real life as it had varied tasks involved, not only the matching of a different lengths of a line to a standard line. In conclusion, there are many factors that influence conformity. The situational factors are group size, the presence of an ally (reduced conformity), the opportunity to write down their response (reduced conformity), the increasing difficulty of the task at hand (increased conformity) and when taste is tested rather than perception of facts (reduce conformity). The dispositional factors that increase conformity are personality traits such as low self-esteem, high need for social support and approval, high anxiety, feeling of low status in the group, authoritarian attitudes and narrow-mindedness, having less leadership ability and being less intellectually competent. Culture and gender are also dispositional factors that influence conformity. ...read more.