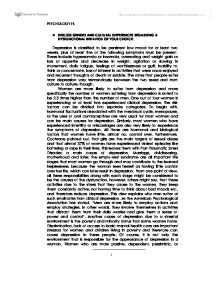 Gender and Cultural Differences in Depression

* DISCUSS GENDER AND CULTURAL DIFFERENCES REGARDING A DYSFUNCTIONAL BEHAVIOR OF YOUR CHOICE. Depression is classified to be persistent low mood for at least two weeks, plus at least five of the following symptoms must be present. These include hypersomnia or insomnia, overeating and weight gain or loss of appetite and decrease in weight, agitation or slowing in movement, daily fatigue, feelings of worthlessness or guilt, inability to think or concentrate, loss of interest in activities that were once enjoyed and recurrent thoughts of death or suicide. The rates that people suffer from depression vary tremendously between the two sexes and from culture to culture, though. Women are more likely to suffer from depression and more specifically the number of women suffering from depression is noted to be 2-3 times higher than the number of men. One out of four women is experiencing or at least has experienced clinical depression. ...read more.

say, that these activities due to the stress that they cause to the women, they keep them constantly active, not having time to think about bad moods etc, and therefore reduce depression. This view explains why men suffer at such small rates from clinical depression. As the American Psychological Association has stated, "Men are more likely to employ actions and employ strategies. In other words, they involve themselves in activities that distract them from their daily worries and give them a sense of power and control". Another cause of depression due to a stressful environment is the poverty and minority status that some women have. Discrimination, lack of access to basic mental health care are important stressors for women and children living in poverty and therefore can cause depression in these people. Of course, it is not only the environment that is responsible for the appearance of depression in a woman. ...read more.

As a result it is rather unlikely the idea of "aggression-turned-inward" to be responsible for depression among those people. In societies where blaming those around, rather than oneself for personal failures is common, it is most likely for depression to be expressed in terms of physiological symptoms. Another example could be the Buddhist cultures of Sri Lanka, where people believe that "hopelessness lays in the nature of the world, the salvation lies in understanding and overcoming that hopelessness." In other words, it is part of the Buddhists' culture to feel depressed and they see it as something absolutely normal, helping them to salvation. Finally, Prince (1968) showed that the rates of depression in non-Western countries appeared mainly together with the Westernization in former colonial countries. It is apparent, that depression cannot be classified in the same ways in different cultures. Therefore symptoms and their treatments should not be isolated from their cultural context, since that may result in major flaws. ?? ?? ?? ?? PSYCHOLOGY HL 1 ...read more.