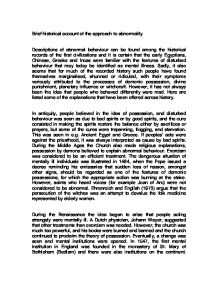 Brief historical account of the approach to abnormality Descriptions of abnormal behaviour can be found among the historical records of the first civilizations and it is certain that the early Egyptians, Chinese, Greeks and Incas were familiar with the features of disturbed behaviour that may today be identified as mental illness. Sadly, it also seems that for much of the recorded history such people have found themselves marginalised, shunned or ridiculed, with their symptoms variously attributed to the processes of demonic possession, divine punishment, planetary influence or witchcraft. However, it has not always been the idea that people who behaved differently were mad. Here are listed some of the explanations that have been offered across history. In antiquity, people believed in the idea of possession, and disturbed behaviour was seen as due to bad spirits or by good spirits, and the cure consisted in making the spirits restore the balance either by sacrifices or prayers, but some of the cures were trepanning, flogging, and starvation. This was seen in e.g. Ancient Egypt and Greece. If peoples' acts were against the priesthood, it was always interpreted as cause by bad spirits. ...read more.

The mentally ill behaved much more quiet under his care, and this led to a change in attitude. He saw the sick as normal people who had lost their ability to reason normally because of the environmental stress. He also introduced occupational therapy and light work. He achieved a high rate of success (70%). Pinel's represents the first of the environmental stress explanations for disturbed behaviour. His treatments were much more effective than the punitive ones following the possession theory, and his ideas spread through western Europe, where for example, William Tuke, a Quaker, persuaded others from his religious group to fund the building of a mental hospital, the York Retreat founded in 1796. Ironically, the success or moral treatment also contributed to its downfall in the latter stages of the nineteenth century, as it became apparent that mental illness was much more common than had previously been thought. As more people were recognised to be suffering from mental illness, major building programmes were instigated both in Europe and the United States, leading to the rapid growth in the number of state-run asylums for the mentally ill. ...read more.

This was extended to the discipline of psychiatry. The discovery of the consequences of syphilis to mental health in the beginning of the 20th century, encouraged the assumption within psychiatry that all mentally problems had a physical origin (somatogenesis) and could be treated with somatic therapies (drugs, physical treatments). In the early years, it was mostly a question of trying things and see what happened. The mentally ill had no civil rights, and experimental treatment was accepted. Reliance on empirical evidence led to giving up some of the somatic therapies that had been developed in the 20th century, such as insulin shock therapy and brain operations (lobotomy, leucotomy). However, electro-convulsive therapy is still used because research has shown good results although the procedures are considered controversial. Not all scientific discoveries have favoured somatogenic approaches. For example, the value of biofeedback training to help control anxiety and the adoption of cognitive therapy in the treatment of depression, both tend to support psychogenic arguments. In the 20th century, the pendulum has continued to swing between somatogenic and psychogenic explanations of disorders. Since psychiatrists are trained doctors, there has been a tendency to adopt the somatogenic explanation, also called 'the medical model'. Psychologists, on the other hand, tend to adopt psychogenic explanations. ...read more.