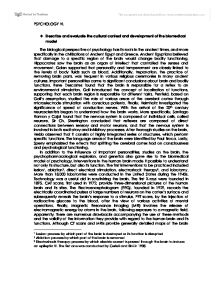 Historical and Cultural factors that gave rise to the Biological Perspective

* Describe and evaluate the cultural context and development of the biomedical model The biological perspective of psychology has its roots in the ancient times, and more specifically in the civilizations of Ancient Egypt and Greece. Ancient Egyptians believed that damage to a specific region of the brain would change bodily functioning. Hippocrates saw the brain as an organ of intellect that controlled the senses and movement. Galen supported that personality and temperament are closely linked to the levels of body fluids such as blood. Additionally, trepanation, the practice of removing brain parts, was frequent in various religious ceremonies in many ancient cultures. Important personalities came to significant conclusions about brain and bodily functions. Rene Descartes found that the brain is responsible for a reflex to an environmental stimulation. Gall introduced the concept of localization of functions, supporting that each brain region is responsible for different tasks. ...read more.

In addition to the influence of important personalities, studies on the brain, the psychopharmacological explosion, and genetics also gave rise to the biomedical model of psychology. Interventions in the human brain made it possible to understand not only its structure, but also its function. The first interventions to be practiced included lesion1, ablation2, direct electrical stimulation, electroshock therapy3, and lobotomy. More than 18,000 lobotomies were conducted in the United States during the 1940s. Technology was a useful aid in scrutinizing the brain. The first X-rays were founded in 1895. CAT scans, first used in 1972, provide three-dimensional pictures of the human brain and its sites. The Electroencephalogram (EEG), founded in 1929, records the electrically coordinated pulses of large numbers of neurons on the cortex's surface and subsequently reveals the brain's response to a stimulus. ...read more.

It has been found that particular neurotransmitters, such as norepinephrine, serotonin, dopamine, and others, are the primary cause of serious mental disorders (e.g. Depression, schizophrenia). Subsequently, drugs have been offered by this psychological model to treat some of these disorders. The most widely used drugs are Lithium, Prozac, Phenelzine, and Imipramine for the treatment of depression, and Chlorpromazine for the treatment of schizophrenia. The development of the studies on genetics, initiated in 1866 by Gregor Mendel, provided valuable information on the functioning of chromosomes, the DNA molecule, and inheritance. In conclusion, the establishment of institutes and universities enabled scientific studies. 1 Lesion: process by which part of the brain is destroyed or its function is disrupted 2 Ablation: process by which part of the brain is removed 3 Electroshock therapy: process by which electric current is passed through the brain to induce an epileptic fit. The first one was conducted by Cerleti and Bini in 1938. ?? ?? ?? ?? PSYCHOLOGY HL ...read more.