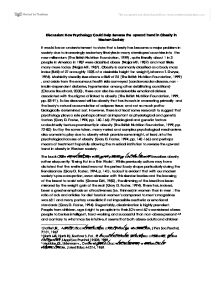 How Psychology Could Help Reverse the Trend in Obesity

Discussion: How Psychology Could Help Reverse the upward Trend in Obesity in Western Society It would be an understatement to state that obesity has become a major problem in society due to increasingly sedentary lifestyles in many developed countries into the new millennium (The British Nutrition Foundation, 1999), quite literally about 1 in 3 people in America in 1987 were classified obese (Najjar MF, 1987) and most likely many more today (Najjar MF, 1987). Obesity is commonly classified as a body mass index (BMI) of 27 or roughly 120% of a desirable height for weight(Johanna T. Dwyer, 1994). Morbidity steadily rises above a BMI of 25 (The British Nutrition Foundation, 1999) , and aside from the enormous health risks conveyed (cardiovascular disease, non-insulin-dependent diabetes, hypertension among other debilitating conditions) (Claude Bouchard, 2000), there can also be considerable emotional distress associated with the stigma of linked to obesity (The British Nutrition Foundation, 1999, pp. 83-91). To be discussed will be obesity that has its roots in overeating primarily and the body's natural accumulation of adipose tissue and not so much patho-biologically determined sort. However, there is at least some research to suggest that psychology plays a role perhaps almost as important as physiological and genetic factors (Gary D. Foster, 1994, pp. 140-166). Physiological and genetic factors undoubtedly feature prominently in obesity (The British Nutrition Foundation, 1999, pp. 72-80) but by the same token, many varied and complex psychological mechanisms also come into play due to obesity which provide some insight, at least, into the psychological causes of obesity (Gary D. ...read more.

Later research focussed on the role of emotion in exercise especially that of motivation and satisfaction to varying degrees of success6,7. Neither of these approaches worked much long-term as it seemed that motivation could not be maintained over these prolonged periods. Certainly, social support programs served to great effect (Wing and Jeffery 1999) although; most startlingly this was one of the few programs that managed to maintain weight loss in full to this day whereas a control group in comparison with the 6 month period of those not given social support. It also seems that the media can be exploited again with surprising empirical efficacy8,9. It seems that the very aspect of obesity that makes it so difficult to quantify: its complexity may also make it much easier to treat in that it can be treated effectively at every stage of its life cycle, but like a malignant cancer, every person have their own tailored treatment as no two cases of obesity have exactly the same causes. Admittedly, simply assuring the mental health of obese people is not enough; there must be some biological treatment to assist their weight loss the two main problems being how obtain and maintain motivation and overcoming the biological causes of obesity. It is evident that sometimes simple mind over matter cannot work with certain biological causes, say, the way a cocaine addict's brain changes. Despite the scientific establishment not having undertaken any studies on the differences in brain structure in binge eaters and food addicts, it is likely that there would be many similarities (Gross, 2005), (Orford, 1984). ...read more.

This is logically incorrect as a reduction in research may have, at any rate, in part at least lead to insufficient tools with which to combat obesity. Many factors may be at play here including, it seems an innate prejudice against obese people shared by physicians and psychologists alike (Gary D. Foster, 1994). It seems that much of this research remains pertinent however new developments in technology as well as the overall, progression in the times means that some of this will obviously not be as true as it might and should be. As I mentioned earlier, we have only scraped the tip of the obesity epidemic, one whose symptoms and causes are just as diverse as any other biological disease and I certainly believe more research needs to undertaken not only to repeat former experiments but to investigate new hypotheses and novel means of looking into how psychology, but not just psychology, can help reverse this upward trend we are seeing in obesity. Chiropractic treatments and hypnosis merit greater research however preliminary empirical trials have indicated inefficacy and so have not been touched upon in this discussion. Like with any disease obesity in society seems to have peaked and is now flat-lining in terms of its prevalence, new treatments and increased awareness that obesity is a medical condition that can be treated and not an innate deficiency (of willpower) on the part of the obese person as it was, unofficially (Medscape, 2009). That said, a new wave of research that seems to have some staying power appears to be born out of the ashes of the old research10; again I reiterate, I am hopeful for the future. ...read more.