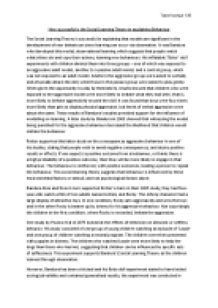 How successful is the Social Learning Theory in explaining Bahaviour?

﻿Tara Koonjul 13S How successful is the Social Learning Theory in explaining Behaviour The Social Learning Theory is successful in explaining that models are significant in the development of new behaviours since learning can occur via observation. It was Bandura who developed this model; observational learning which suggests that people watch what others do and copy their actions, learning new behaviours. His inflatable ?Bobo? doll experiments with children divided them into three groups ? one of which was exposed to an aggressive adult model, another to a passive adult model, and a control group, which was not exposed to an adult model. Adults in the aggressive group were asked to verbally and physically attack the doll, while those in the passive group were asked to play gently. When given the opportunity to play by themselves, results showed that children who were exposed to the aggressive model were more likely to imitate what they had seen, that is, more likely to behave aggressively toward the doll. ...read more.

Bandura Ross and Ross in turn supported Rotter?s claim in their 1965 study; they had four-year-olds watch a film of two adults named Johnny and Rocky. The Johnny character had a large display of attractive toys. In one condition, Rocky acts aggressively and wins the toys and in the other Rocky is beaten up by Johnny for his aggressive behaviour. Not surprisingly the children in the first condition, where Rocky is rewarded, imitate the aggression. One study by Poulos et al in 1975 looked at the effects of television on altruistic or selfless behavior. His study consisted of one group of young children watching an episode of ?Lassie? and one group of children watching a neutral program. The children were then presented with puppies in distress. The children who watched Lassie were more likely to help the dogs than those who had not, suggesting that children can be influenced by specific acts of selflessness. This experiment supports Bandura?s Social Learning Theory as the children learned through observation. ...read more.

The behaviour is reinforced, with positive outcomes, leading a person to repeat the behaviour. This social learning theory suggests that behaviour is influenced by these environmental factors or stimuli, and not psychological factors alone. In 1990, Cumberbatch commented on the novelty value of the Bobo doll, that is, the fact that it bounces back up when it is knocked down, and found that children who had not played with a Bobo Doll before were five times as likely to imitate the aggressive behaviour than those who were familiar with it. In addition, Charlton et al?s 1999 in St. Helena did not support the theory of media interaction in the social learning theory. School aged children in the island of St. Helena who had never been exposed to television were evaluated before and after observing a violent program. Results showed that there was no significant increase in aggressive behaviour after this exposure. However, from the historical perspective, the social learning theory is the most successful in explaining behaviour; imitation is instinctive, as children have the innate need to copy the actions of others. ...read more.