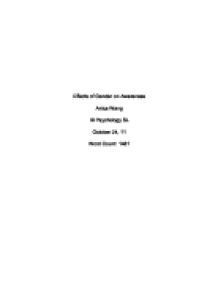 IB Psychology Experiment - Our aim is to determine the effect of gender on awareness on the moon walking bear video.

Effects of Gender on Awareness Anica Wang IB Psychology SL October 24, 11 Word Count: 1481 Abstract Our aim is to determine the effect of gender on awareness on the moon walking bear video. Ten female and ten male high school students from Kaohsiung American School will be picked and asked whether they would like to participate in the experiment. The sampling method we chose is the opportunity sampling method, since we wanted to avoid people who already seen the video before to participate, which could affect the result. We walked around the school and ask the student we saw whether they would like to participate or not. The independent variable is the gender and the dependent variable is the participants' awareness level. These participants will be asked whether they seen the video before or not and we would ask if they find any abnormal part throughout the video. The data shows that there is only a slight difference between results of male and female. Due to the results of the experiment, it shows that there is no effect of gender on awareness. Introduction People tend to be focused of an important object they see in front of them. ...read more.

The limitations are that we only test high school students that haven't watch the video before. This might make our experiment not so accurate since the participants don't represent the whole country's high school students, or even high school students around the world. Another issue to consider is that people might have seen a similar version of this video before on Youtube, such as gorilla version and stormtrooper version that could be found easily on Youtube. This might remind the participants of watching the same kind of video before and make the data inaccurate. Appendices Moon Walk Bear Video: http://www.youtube.com/watch?v=Ahg6qcgoay4 Consent Form: Our research study is about gender awareness. We're testing on whether the difference on gender will affect the participants' awareness level. In this study, we will request the participant to watch this Youtube clip called the moon walking bear. If you have watched it, then this video won't be accurate. If you haven't watched it before, then let's watch it. We'll ask for your name and grade first. After watching the video, we'll ask you a question, if you didn't see it, we'll watch it again. Due to the ethical concerns, we will keep your name in privacy by using initials, unless you specially request us to make it public. ...read more.