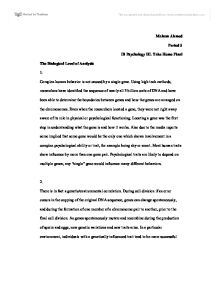 IB Psychology HL Take Home Final - The biological level of anaylsis. Most human traits show influence by more than one gene pair. Psychological traits are likely to depend on multiple genes; any single gene would influence many different behaviors.

Maham Ahmed Period 5 IB Psychology HL Take Home Final The Biological Level of Analysis 1. Complex human behavior is not caused by a single gene. Using high tech methods, researchers have identified the sequence of nearly all 3 billion units of DNA and have been able to determine the boundaries between genes and how the genes are arranged on the chromosomes. Even when the researchers located a gene, they were not right away aware of its role in physical or psychological functioning. Locating a gene was the first step in understanding what the gene is and how it works. Also due to the media reports some implied that some gene would be the only one which shows involvement in a complex psychological ability or trait, for example being shy or smart. Most human traits show influence by more than one gene pair. Psychological traits are likely to depend on multiple genes; any "single" gene would influence many different behaviors. 2. There is in fact a genetic/environmental correlation. During cell division if an error occurs in the copying of the original DNA sequence, genes can change spontaneously, and during the formation of one member of a chromosome pair to another, prior to the final cell division. ...read more.

The Socio-cultural Level of Analysis 1. An emic describes a belief or behavior done consciously or unconsciously, it arrives from a person within a culture. On the other hand an etic is something that describes a behavior or belief made by an observer. An etic can be used for other cultures as well, it does not depend on one specific culture. In social and behavioral sciences, the terms etic and emic are used to pertain to different sorts of data or information concerning behavior of humans 2. Enculturalism is a when a person is able to learn the needed material of a culture and the values and behaviors appropriate by which the individual may be surrounded by. Enculturalism, if successful, results in competence with a language, and values and rituals of the culture, it can also make an individual become "fit" to the society. Culture becomes part of everything an individual does, even when a culture changes, enculturation becomes a process which always brings together people. 3. Ethnocentrism is when one believes that their own culture, nation, or religion is better than everyone else's. ...read more.

2. Compared to individualistic societies, the more group oriented societies act more pro socially, for example in places around the world it is shown that younger individuals become less likely to help strangers than people from other areas who show to be more group oriented and who blend more with larger societies due to his they would help more. 3. Bystanderism is when people do not meddle in someone's situation where their help would not really be required. The theory shows that if one is surrounded by more and more people, one would be less likely to receive any kind of help. Diffusion of responsibility is when if there are more people around the situation than it would become less likely for and aid to be given, and this usually results in bystander apathy. Darley and Latane found a study referring to this which says that most people do not give aid thinking that someone else in the larger group with give aid either way. 5. Cultures of East Asia show less violence than western nations. Most problems like such can then create an enemy. Children who engage with more social aspects and surroundings can also behave violently. Whether the society is individualistic or group -oriented can determine the amount of violence that may elicit. ...read more.