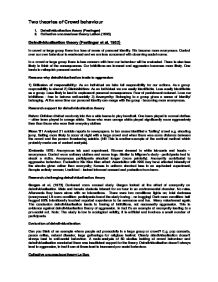 In crowd or large group there is a loss of sense of personal identity. We become more anonymous. Control over our own behaviour is weakened and we are less concerned with observing social norms.

In a crowd or large group there is less concern with how our behaviour will be evaluated. There is also less likely to think of the consequences. Our inhibitions are lowered and aggression becomes more likely. One tends to relinquish personal control.

Reasons why deindividualisation leads to aggression

1) Diffusion of responsibility: As an individual we take full responsibility for our actions. As a group responsibility is shared 2) Disinhibition: As an individual we are easily identifiable. Less easily identifiable as a group. Less likely to lead to unpleasant personal consequences. Fear of punishment reduced. Lose our inhibitions - free to behave anti-socially 3) Anonymity: Belonging to a group gives a sense of identity/ belonging. At the same time our personal identity can merge with the group - becoming more anonymous.

Mann ’81 Analysed 21 suicide reports in newspapers. In ten cases identified a ‘baiting' crowd e.g. shouting jump. Baiting more likely to occur at night with a large crowd and when there was some distance between the crowd and the person threatening suicide. (NB This is another example of the archival method which probably made use of content analysis).

Gergen et al. (1973) Darkened room arousal study. Gergen looked at the effect of anonymity on deindividualisation. Male and female students interact for an hour in an environmental chamber. No rules. Afterwards they leave alone with no interactions.  There were two conditions: lights on; total darkness (anonymous) Lit room condition: participants found the study boring – no hugging! Dark room condition: half hugged 89% intentionally touched reported experience to be sensuous and fun.  Many volunteered again. The conclusion deindividualisation leads to freeing of inhibitions, not necessarily aggression. This is evidence against deindividualisation theory of aggression. In fact it’s an example of anonymity leading to a pro-social act. Note: The study is low in ecological validity, it is artificial and involves a small number of participants.

The mechanisms of what happens 1) Anonymity: due to sheer numbers the individuals, the crowd feels a sense of invincible power along with a lack of responsibility. 2) Contagion: crowd behaviour spreads amongst its members like an involuntary disease 3) Suggestibility: the suggestions of crowd members or leaders are accepted uncritically due to loss of conscious personality

The crowd has the following effect upon its members: 1) Homogeneity of personality: all members behave in the same way. 2) Intellectual retardation: Crowds are intellectually inferior to the individuals who compose it, showing rapid shifts of attention and acceptance of ideas in the absence of evidence. 3) Violent action: with a loss of constraint, savage and destructive behaviour is shown. 4) Exaggerated emotionalism: Crowd members become excited and impulsive

Evaluation of theory: 1) Reporting – unscientific based largely on anecdotal evidence 2) LeBon contrasts the irrationality of the crowd with a model of normal isolated people – lone individuals can be just as irrational, stupid and emotional 3) LeBon does not distinguish between types of crowds e.g. often peaceful gathered for the purpose of enjoyment and celebration 4) Explanations of crowds being mobs serves the political purpose of denying crowd action about legitimate concerns. 5) Others challenge theory, suggesting that crowd behaviour is not wild and unruly and does not involve a loss of identity.