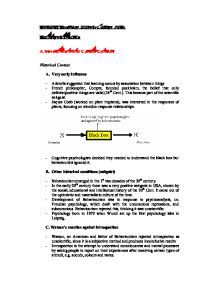 IB HIGHER Level May 2003 Psychology Notes Learning Perspective A. Development and Cultural Contexts Historical Context: A. Very early influence - Aristotle suggested that learning occurs by association between things - French philosopher, Compte, founded positivism, the belief that only definite/positive things are valid (18th Cent.). This became part of the scientific zeitgeist - Jaques Coeb (worked on plant tropisms), was interested in the responses of plants, focusing on stimulus-response relationships. - Cognitive psychologists decided they needed to understand the black box but behaviourists ignored it. B. Other historical conditions (zeitgeist) - Behaviourism emerged in the 1st two decades of the 20th century. - In the early 20th century there was a very positive zeitgeist in USA, shown by the social, educational and intellectual history of the 20th Cent. It came out of the optimistic and materialistic culture of the time. - Development of Behaviourism was in response to psychoanalysis, i.e. Freudian psychology, which dealt with the unconscious repressions, and subconscious. Behaviourism rejected this, thinking it was unscientific. - Psychology born in 1879 when Wundt set up the first psychology labs in Leipzig. C. Watson's reaction against introspection - Watson, an American and father of Behaviourism rejected introspection as unscientific, since it is a subjective method and produces inconclusive results - Introspection is the attempt to understand consciousness and mental processes by asking people to report on their experiences after receiving certain types of stimuli, e.g. sounds, colours and tastes. - John Watson rejected it because he said reports were too subjective - not facts but thoughts. - Watson said: "consciousness has never been seen touched, smelled, tasted or moved. It is a plain assumption just as unprovable as the old concept of the soul" D. The influence of animal psychology - Watson said "Behaviourism is a direct outgrowth of studies in animal behaviour during the 1st decade of the 20th century." 1929. ...read more.

- To explain the Cocktail Party Effect, a number of models have been proposed. Principles of Auditory Attention - Auditory attention is very difference to visual attention as it has multiple channels as opposed to one, because the ears are stationary and can't be directed. - Most psychologists agree that there must be the same filter function in attention. Broadbent's Filter Theory - Notice the use of an "information processing" approach and the use of a model. Evidence - Cherry's Binaural Tests - Physical stimuli of 2 voices so similar they can't be differentiated. - The more different physical properties, the easier it is to differentiate. - Cherry's dichotic (stereo) tests show it is impossible for someone to listen to two people simultaneously. - Subjects were played two messages, one in each ear, and were asked to repeat aloud one of the messages. - When asked questions about the shadowed story, they could answer them, but when asked about the story that was playing in their other ear, they had very little idea about its content; they could only identify some basic physical properties of the speaker e.g. male, speaking quickly. 4) Emotional Intelligence See CA52 on Emotional Intelligence - The know-how involved in comprehending social situations, first called social intelligence and managing oneself successful. - A critical part of social intelligence and emotional intelligence - ability to perceive, express, understand and regulate emotions also and self-aware. - Manage their emotions well and not overwhelmed by/with depressions, anxiety or anger. - Can delay gratification in favour of long-term rewards rather then being overtaken by immediate impulses. - Can read other's emotions and know what to say to a grieving friend, how to encourage colleagues, and how to manage conflicts well. - Therefore they are often successful in careers, marriages and parenting. Evaluation of Cognitive Perspective --> See CA11 B. Framework See CA35 on Cognitive Perspective - Key Concepts and Linkages Key general concepts (see earlier notes) ...read more.

- The difference between the high and low activity was 30 times. - Active mice would run the length of a football pitch in 6 minutes. - Low Activity mice would sit and quiver in a corner. - The differences were still getting larger at the end of the experiment, which suggests that many genes are involved because all the available alleles would have occurred if there were only two. - See later twins studies for more research into genes. Experimental Testing of Hypotheses See section C1 for details - Biological psychologists have tried to use a scientific, objective and rigorous methodology, thus making psychology even more scientific. Use of both Quantitative and qualitative methods See section C1 - Most people accept both methods are needed for good experiments. - It is impossible to reduce everything to numbers. - Case studies also used. Current Standing - Recent advances in technology e.g. CAT's PET's and MRI scans gives it a very good standing in scientific circles. - More scientific, objective and quantitative. - Very contemporary perspective --> developing rapidly and seems to be providing more and more evidence that many aspects of behaviour have a biological basis. - Now is an emerging branch of psychology called evolutionary psychology and sociobiology. Evolutionary Psychology - The application of Darwinian principles to psychology. - Behavioural features selected for by natural selection in the same way as physical features. - Emphasises the fact that we're just animals and primates and we have a great deal in common with the other three great apes mentally as well as physically. E.g. the way we learn (social learning theory), facial expression are the same as chimps, orang-utans and apes. - We are on an evolutionary continuum with apes. E.g. 1 Sex Differences - Sex differences in humans are biologically based - with males primates larger and stronger than females. - Due to the size differences, the males are more aggressive than females, and dominant. - Male primates have more testosterone (linked with aggression and dominance). E.g. ...read more.