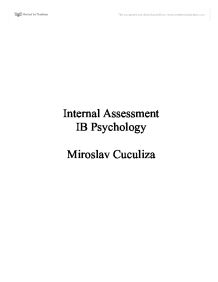 Internal Assessment IB Psychology Miroslav Cuculiza Introduction: Memory is not as accurate to past experiences. In the experiment of Loftus and Palmer (1974), the error trying to determine that people try to fit past events into a present situation. There study was with eyewitness and influences of a person's memory of an event. Throughout is experiment we are going to prove that memory given cainfluence a situation of the present situation. The brain is best known for many things, the most important is memory. Memory is the capacity to retain information given. In memory there is the long term memory, and the short term memory. The long term memory has the capacity to retain things for a long period of time, and the short term memory has te capacity to retain things for almost thirty seconds with a clear view after it has occurred. In Loftus and Palmer experiment they were trying to experiment with the long term memory and demonstrate that the memory is not as accurate as they say. The first experiment that Loftus and Palmer conducted consisted of forty-five students from the University of Washington. ...read more.

this worb make it sound like if it was a bit harsh into the two cars hittin into each other. The verb bumped was the lowest avarege of miles per hour. The word bumped means " to come more or less violently in contact with" even thought the word bumped means something harsh people don't tend to thing that bumped is someting violently, but they think that it is just something small that collided into each other with no real injury. In the study of Loftus and Palmer the verb smashed was the highest mean estimate, with the difference in our experiment of nine miles per hour for the verb smashed. From the highest of Loftus and Palmer experiment and the highest of our experiment was a difference of 9.95. We several limitation conducting this experiment, we couldn't show the video to all of the participants on the same time, because of the difficulties in schedule of the school. Eventually after this limitation we had to asked them to not comment about the experiment to the future participants. In conclusion people tend to think that the information they supplied after and event, influences a witness memory. This is why the changing in verb can show us the real difference of how people really do tend top change theur mind after an event. ?? ?? ?? ?? ...read more.