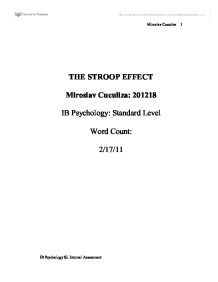 Choose wisely the place in which you will perform the experiment taking into consideration that there would be nothing distracting the participants during their experimentation. 2. Collect signed consent forms. 3. Take one participant at a time to the private place and clearly explain the experiment to him/her. 4. Give the first stimulus for the participant to read, and take time. Write data on piece of paper. 5. Perform the same steps with stimulus two and three. 6. Takes notes on everything on a piece of paper. 7. Process data collected on clean sheet of paper. Results: The score recorded was verbally confirmed between the experimenters. The data was collected in one separate sheet of paper and then it was inserted into a table created on the computer. The table is neatly arranged and is easy to understand the time each contestant needed to perform the experiment. Name of Participant Stimulus #1 Black and White Stimulus #2 Word with color Stimulus #3 Word with different ink 1. Paola Moncada 9.36 seconds 14.09 seconds 26.89 seconds 2. ...read more.

Both of them are Jose Treasure and Ricardo Vasquez. They did an outstanding job by reading everything really fast. Also, we found out that most of the women did badly on the experiment and maybe it was because they were shy of reading or maybe of getting stuck on a word. By doing this experiment we learned how reading something several times can really play with your mind because first the people had to read the words very easy but at the end when they did not want to read the word, they read it. So with this fact we really found out haw the mind can play jokes on you even when you want to say something, the brain directly sends a different signal to your mouth and you say a completely different thing. In conclusion, this experiment has helped me to make my first psychology experiment in my life and also it helped me to learn a lot of things about psychology and how the mind works etc. There are many differences in sex, race, color but the most important difference in all of us is our mind and how it works because it makes us a completely different person to the rest. ...read more.