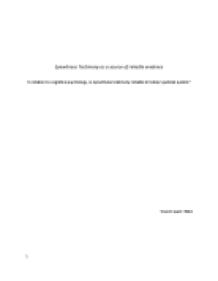 Memory recall of a real-life situation is accurate even after a few months and the loaded questions do have as much of an effect as they do in laboratory experiments (e.g Loftus & Palmer, 1974) (Eyewitness Testimony Psychology). The above information gives a re-assurance that eyewitness testimony is not completely unreliable depending on the situation and the witness?s role in the event. There may be some situations where memory distortions take place and other situations where they do not. Whether memory distortion or reconstruction takes place or not depends on the witness?s state of mind at the time of the event. The emotional state of the individual may cloud their reason, judgment and perception; therefore it is necessary to be neutral and unbiased when witnessing a crime scene. Weapon Focus The study by Yullie and Cutshall (1986) also relates to ?weapon focus? as a psychological factor that affects eyewitness testimony. When weapons are involved the witness is less likely to remember details about the criminal but is more likely to remember the details of the weapon (Eyewitness Testimony Psychology). An experiment conducted by Johnson and Scott (1976) as cited in Loftus et al (56) illustrated this phenomenon. In the ?no weapon? condition participants overheard a mild conversation in the next room about an equipment failure, witnessed a confederate enter the room with a grease pen, watched him utter a single line and leave. In the ?weapon? condition the participants overheard a violent conversation along with crashing objects, saw a confederate enter the room with a bloodied letter opener, watched him utter a single line and then leave. Participants in both condition witnessed the target individual for four seconds. It was found that 33% of the participants in the ?bloody letter opener? condition identified the culprit correctly and 49% of the participants in the greasy pen condition identified the culprit correctly. A reduced ability to remember the confederate was associated with the presence of a weapon. ...read more.

It is important for jury?s to be aware of these factors before placing a verdict and should not place great reliance on factors such as confidence and vivid descriptions of details. If possible, it is advisable to find other evidence rather than eyewitness testimony. A major limitation of the research investigated is that majority of the studies done in relation to eyewitness testimony are laboratory studies. This inhibits us to generalize the data collected to the real world. An implication for future research would be to carry out more interviews with individuals who have witnessed acts of crime and violence rather than basing conclusions on laboratory studies. Also, it could be helpful to carry out research regarding a number of factors that affect eyewitness testimony (e.g. a study that compares the ability to remember events when the variables are age, gender, weapons and misleading questions). The limitation presented does not change the fact that human memory is a very personal and comparative aspect and therefore cannot be a foundation for any important decisions. It is important to know that memory changes with time and every consequent attempt to recall the event will be just another skewed interpretation of the event. Eyewitnesses can refute or support the general facts about the case but the details and their testimony should not be put superior to the actual evidence presented in court. Studies have also proven that innocent people have been accused due to eyewitness testimony, this elaborates on the unreliability of it. Our ability to recall an event is affected by the information provided after the event, the level of stress and anxiety we are at during the time of the event also affects it, the presence of weapons also distorts our memory, reconstructive memory is yet another psychological factor that makes eyewitness testimony unreliable, our expectations, age and gender also play a role when giving a testimony. All these factors should be taken into consideration when the evidence provided is eyewitness testimony. The reliability of eyewitness testimony in today?s judicial system is very low and should be analyzed in depth before reaching conclusions. ...read more.