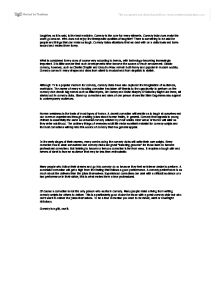 Laughter, as it is said, is the best medicine. Comedy is the cure for many ailments. Comedy truly does make the world go around. Who does not enjoy the therapeutic qualities of laughter? There is something to be said for people and things that can make us laugh. Comedy takes situations that we deal with on a daily basis and turns around and makes them funny.

What is considered funny does of course vary according to trends, with technology becoming increasingly important. It is little wonder that such developments have become the source of much amusement. Classic comedy, however, such as Charlie Chaplin and Groucho Marx remain both funny and popular in modern society. Comedy comes in many shapes and sizes from silent to musical and from slapstick to stylish.

Although TV is a popular medium for comedy, comedy clubs have also captured the imagination of audiences, worldwide. The career of many a budding comedian has taken off thanks to the opportunity to perform on the comedy club circuit. Big names such as Mike Myers, Jim Carrey and Eddie Murphy of Saturday Night Live fame, all started out in comedy clubs. Stand-up comedians and stars of one person shows like Ellen Degeneres also appeal to contemporary audiences.

Human weakness is the basis of most types of humor. A decent comedian will enable us to laugh at ourselves and our common experiences through cracking jokes about human frailty, in general. Comedy that appeals to young children is essentially the same as universal comedy relished by most adults. Kids' sense of humor will alter as they enter adulthood. The ordinary things of everyday adult life make excellent material for comedy scripts and the best comedians will tap into this source of comedy that has general appeal.

In the early stages of their careers, many comics doing the comedy clubs will write their own scripts. Every comedian has to start somewhere and comedy clubs are great "breeding grounds" for those keen to become professional comedians. But training to become a famous comedian is far from easy. It requires a tough skin and nerves of steel to face an audience that may be less than enthusiastic.

Many people who follow their dreams and go into comedy do so because they feel an intense desire to perform. A successful comedian will get a high from the feeling that follows a good performance. A comedy performance is as much about the delivery than the jokes themselves. Experienced comedians can deal with a difficult audience or a bad performance in their stride; this is what makes them a true professional.

Of course a comedian is not the only person who works in comedy. Many people make a living from writing comedy scripts for others to deliver. This is a particularly good choice for those with a great comedy style but who don't want to deliver the jokes themselves. To be a true comedian you need to be clever, alert or downright ridiculous.

Comedy is a gift, use it.