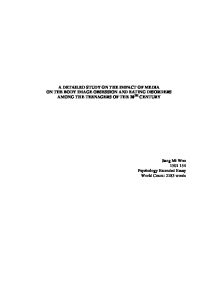 A DETAILED STUDY ON THE IMPACT OF MEDIA ON THE BODY IMAGE OBSESSION AND EATING DISORDERS AMONG THE TEENAGERS OF THE 20TH CENTURY Sang Mi Woo 1501 154 Psychology Extended Essay World Count: 2183 words Abstract In today's media, messages on the rewards of thinness and the punishments of obesity are everywhere. These unrealistic standards undermine self-image, self-esteem, and teens' physical well-being. And yet, most teenagers are accepting these standards. This paper will examine how psychological and neurological forces aided by media are urging teenagers' bodies toward thinness. The results put teenagers in deadly situations by making them cross the thin line which separates normal dieting from an eating disorder. This study will also take a look at if the media simply reflects the body image of teenagers or if it reinforces and shapes it. Word Count: 102 words Table of Contents Introduction 4 Marketing Thinness to Teenagers 5 Anorexia Nervosa, Bulimia Nervosa 6 Mirror Neurons 6 The Process of Identity Formulation 8 Conclusion 9 Bibliography 11 Introduction People reporting eating problems is not a newly developed trend. Recently, however, the situation has been getting worse, and the number has overwhelmingly increased. This seems inevitable considering how the slim figure has come to represent health as well as beauty in today's society. The food industry, the beauty industry, and even the pharmaceutical industry are all promoting thinness. It is no wonder that teenagers are increasingly becoming obsessed with thinness. ...read more.

Anorexics restrict their food intake, most commonly by starving, because they fear weight gain. On the other hand, people with bulimia try to get what they ate out of the system by forcing themselves to vomit, exercising excessively, or by taking laxatives. While anorexics are noticeably frail, there is often nothing about the external appearance of bulimics to alert others to the presence of the disorder. Bulimics are especially secretive about their conditions, thus "much harder to detect though it is thought to be four to five times more common than anorexia (Gordon, 151-163)." Mirror Neurons Mirror neurons get their name from the theory that these neurons in the brains act almost like a mirror, reflecting what surrounds a person. For example, when one sees another person scratching his/her body part, the one watching this will instantly feel the need to scratch oneself as well. This is because the actions we see trigger the same neural activity in our minds, putting us in the same mental state as that of the person we are watching. These mirror neurons let us understand things intuitively rather than having to think so hard. Applying what is known about the mirror neurons, a neuroscientist named Christian Keysers explained the great effectiveness of radio commercials. Hearing what sounds like a can of soda being opened, then poured over ice in a cup can allow a person to feel as if he/she is doing just that. ...read more.

Then, thinking they failed, their sense of self-esteem will decrease even more and will encourage them to continuously practice the dangerous rituals of eating disorders. Conclusion Eating disorders are becoming much more common in teens in today's society. Consequently, new studies are being carried out in order to discover the causes of this hazardous trend. It is possible that as teens doubt themselves and lose self-esteem, they are choosing to use eating disorders as a mechanism to gain control and acceptance. It could also be that these teens have no control or decision as to whether they want to or do not want to develop eating disorders; the mirror neurons in their brains are automatically drawing them into this black hole of eating disorders. Or, it could be both: conflicts that teens face with peers and self, and the mirror neurons. However, it is clear that the afflictions of media had a great impact on this widespread problem. With the latest rounds of advertisements, news reports on celebrities, and praising thinness, cases of eating disorders in teens have exploded. Helping individual teenagers dealing with their weight and body image will not resolve these issues on a broad scale. Not to mention, teens with eating disorders are very secretive about their rituals. Hence, the only way to escape this dangerous phenomenon is to focus on the society rather than on the individual. If the media can lessen the promoting of unrealistic ideal body image, perhaps it can change the climate in which eating disorders flourish. ...read more.