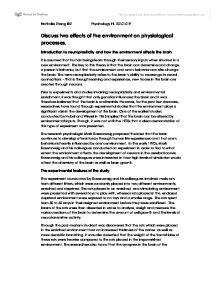 This suggests that both perception and memory are improved. The researchers concluded that numerous aspects of the brain are changed by experience; when something new is learned, the neurons in the brain reconnect to create a new trace. Strengths and limitations of the experimental method used Although rats are considered to be the best model of inherited human diseases, as they share about 99% of their genes with humans, it is still not ascertain that the experimental outcome will be the same for humans as it is, among other things, unethical to involve human beings in an experiment of this type. It can also be questioned why only male rats were used in the experiment; this can therefore not be generalized that the same effect will be present in female rats. The strengths of this study are that it is more efficient to use rats in these types of studies. Rats have a high reproductive ability as well as having large litters; it is therefore not time consuming when using rats in experimental studies. ...read more.

Other findings showed that the ratio of RNA and DNA was greater in the enriched rats. These two brain chemicals are mainly important in cell growth, implying that the chemical activity was higher in these rats. Evidence from this study implicates that the environment has an effect on the development of the brain and that high stimulation lead to the occurrence of dendritic branching every time something new is learned. Though, it is not possible to conduct an experiment involving humans to test the hypotheses if an enriched environment has a beneficial effect in learning and the development of the brain whereas a deprived environment will have negative effect on the brain. It can therefore be concluded that Rosenzweig's study is genuine but it can only be applied to human beings to some extent. Although, if an increasement of dendritic branching occurs every time something is learned, then the findings obtained from the studies involving animals showing how the brain is altered when responding to an environmental stimulation are of great importance for future studies and experiments. ?? ?? ?? ?? Nathalie Zheng IB2 Psychology HL 20101019 ...read more.