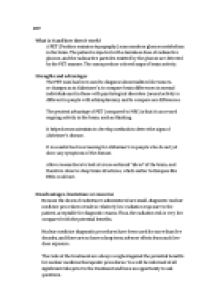 ﻿PET What is it and how does it work? A PET (Position emission topography) scan monitors glucose metabolism in the brain. The patient is injected with a harmless dose of radioactive glucose, and the radioactive particles emitted by the glucose are detected by the PET scanner. The scans produce colored maps of brain activity. Strengths and advantages The PET scan has been used to diagnose abnormalities like tumors, or changes as in Alzheimer?s; to compare brain differences in normal individuals and in those with psychological disorders (neural activity is different in people with schizophrenia); and to compare sex differences. The greatest advantage of PET (compared to MRI) is that it can record ongoing activity in the brain, such as thinking. It helped neuroscientists to develop methods to detect the signs of Alzheimer?s disease. ...read more.

Nevertheless, you should inform the nuclear medicine personnel of any allergies you may have or other problems that may have occurred during a previous nuclear medicine exam. Injection of the radiotracer may cause slight pain and redness, which should rapidly resolve. Women should always inform their physician or radiology technologist if there is any possibility that they are pregnant or if they are breastfeeding. Research studies that illustrate the use of this technology Gur et al. (1995) found more active metabolism in primitive brain centers controlling violence in men than in women. New York University School of Medicine -Using PET and brain-scan-based computer program researchers showed that in the early stages of Alzheimer?s disease, there is a reduction in brain metabolism in the hippocampus. FMRI (Fictional Magnetic Resonance Imaging) What is it and how does it work? ...read more.

Monks also showed less activity in non-concentration parts of the brain Differences due to neuroplasticity-meditating actually physically affected monk?s brain -Fisher (2005) Romantic love Addiction MRI (Magnetic Resonance Imaging) What is it and how does it work? -It provides 3D brain structures -It detects changes in use of oxygen in blood (The area brain activity is --more active has more oxygen) -Show how brain activity reacts to the environment Strengths and advantages -Does not involve effects to radio activity -Can record activity in all brain regions -It use for cell tissue structure -Easily create images from various views -Shows differences between different tissues (quite precise) Disadvantages, limitations or concerns -Expensive cost -Loud noises can intimidate the participants -Movements can affect the quality of picture -Not quite detail as fMRI picture Research studies that illustrate the use of this technology (Don?t use Maguire) -H.M case study by Corkin (2002) -Fisher fMRI (2005) Romantic love Addiction ...read more.