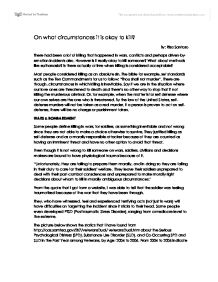 On what circumstances it is okay to kill?

On what circumstances it is okay to kill? By: Risa Santoso There had been a lot of killing that happened in wars, conflicts and perhaps driven-by-emotion incidents also. However is it really okay to kill someone? What about methods like euthanasia? Is there actually a time when killing is considered acceptable? Most people considered killing as an absolute sin. The bible for example, set standards such as the Ten Commandments for us to follow; "Thou shall not murder". There are though, circumstances in which killing is inevitable. Say if we are in the situation where our love ones are threatened to death and there's no other way to stop that if not killing the murderous criminal. Or, for example, when the matter is for self defense where our own selves are the one who is threatened. By the law of the United States, self-defense murders will not be taken as a real murder. If a person is proven to act on self-defense, there will be no charge or punishment taken. WARS & BOMBARDMENT Some people define killing in wars, for soldiers, as something inevitable and not wrong since they are not able to make a choice otherwise to survive. ...read more.

The central concept of Gandhi's philosophy is satyagraha, which means following the Truth in a non-violent way. It is sometimes translated as non-violent resistance or as passive resistance. It means that people try to make change happen without using violence. For example, they could resist a law by not cooperating with it or by actively breaking it. They do not, however, fight or resist violently when police or soldiers try to arrest them or attack them. They simply do what they think is right and accept the consequences of their actions. This kind of resistance takes much courage and self-control. Euthanasia Known as a way to deliberately kill a person for the benefit of that person, euthanasia, in most cases is carried out because the person who is dying asks for it, or when they are being decided to do it because they are unable to make the decision themselves. Even though there are many issues that brings controversy about euthanasia, such as religious believe that refers to suffering as something good, like what Pope John Paul II has written; "It is suffering, more than anything else, which clears the way for the grace which transforms human souls." ...read more.

Summary In my personal opinion, killing is inhumanely a wrong thing to do. Even though the golden rule, the bible, say are not to kill, in cases where there are no other way, such as when someone threaten to kill us and the only way to stop him is to hit him in the head and he died. However it is best to restrain conflicts and avoid killing since they can cause physiological trauma to the personnel. There are also acceptable cases like euthanasia to alleviate the pain of the person. I agree to this concept very much if there are almost no hope for the person to life like, for example, a brain defect. However of course if the person is conscious and don't agree, others should not force the method. On the other hand, people who want to have euthanasia should also be restrained by doctors if there might be a way to solve the problem. Therefore, in my opinion, it is acceptable to kill someone when they are a pinch and their life are at stake or when a sick person cannot function at all (without anything left to be done and when every other way have been done). ...read more.