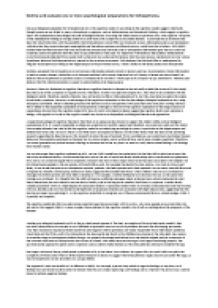 Outline and evaluate one or more psychological exlpanations for Schizophrenia

﻿Outline and evaluate one or more psychological exlpanations for Schizophrenia. One psychological explanation for Schizophrenia (Sz) is the cognitive model. Sz according to the cognitive model suggests that faulty thought processes are linked to many schizophrenic symptoms, such as hallucinations and disordered thinking, which suggest a cognitive input. This explanation acknowledges the role of biological factors in causing the initial sensory experiences of Sz. The cognitive viewpoint is that maladaptive thinking is strongly linked to Sz and many of its symptoms such as hallucinations. A particular focus of interest has been the role of attention with the possibility that Schizophrenics cannot filter out irrelevant sensory information and so are bombarded with data that they cannot interpret meaningfully and therefore experience a different sensory world from that of others. Frith (1992) claimed that the filter between the conscious and the preconscious are faulty and so unimportant information gets into our conscious awareness and Schizophrenics feel they have to pay attention to it because it is important. Frith believes that auditory hallucinations come from being bombarded from sounds both verbal and non verbal and he believes that the preconscious mechanisms test out various hypotheses before a final interpretation is passed to the conscious awareness. Frith believes that this fault filter is underpinned by irregular neural pathways linking to the hippocampus to the pre-frontal cortex, which is linked to the faulty production of dopamine. ...read more.

On the other hand, there has been some promising research supporting his ideas however, this research involves the use of animals. This is a problem as we cannot learn much about human behaviour from animal experiments as humans live in a more complex social world and have much more complex cognitions. Therefore we cannot generalise any animal research findings to humans and at the very least we need to verify these animal findings with findings from human studies. We can also argue that cognitive explanations of Sz, such as Frith?s model are too reductionist in that they fail to take into account the role of environmental factors. Environmental factors such as the role of social and family relationships have contributed to explanations of Sz and so we cannot disregard them completely. Research has shown that a major stress factor has been associated with a higher risk of schizophrenic episodes is the occurrence of stressful life events, for example the death of a close relative. In a study by Brown and Birley, it was found that prior to a schizophrenic episode, patients who had experienced Sz had reported twice as many stressful life events compared to a healthy control group. Bateson et al also suggested the double-bind theory where children who receive contradictory messages from their parents are more likely o develop Sz. ...read more.

There is little empirical research evidence to suggest that Schizophrenics regress back to an earlier life stage, as most schizophrenics do not resemble very young children. The approach is also unscientific as it is different to falsify. For example, a person may admit to negative feelings or may deny such feelings-but such denial could be taken to indicate that they are simply regressing such feelings and so whatever the person says could be taken to indicate negative feelings The psychodynamic approach does not offer effective treatments. In general, psychodynamic treatments aim of find childhood conflicts however; this is no relevant for Sz. Comer found that psychodynamic therapy for Sz has generally proved to be unsuccessful which suggests that the psychodynamic explanation for Sz is not accurate. Recent research has actually suggested that psychodynamic therapies far from making schizophrenics better, may actually make them worse which suggests that the explanation is heavily flawed. Rosen tried to claim some success with the treatment of psychoanalysis however; he was heavily criticised and accusing of using patients who were not Sz and faking data. Therefore his data was discredited. The psychodynamic theory also does not account for why Sz develops so suddenly in late teens and early twenties, and therefore emphasised the importance of biological factors To support the psychodynamic explanation of Sz, some of the symptoms such as loss of contact with reality, can be accounted for with the regression to an early stage of development. ...read more.