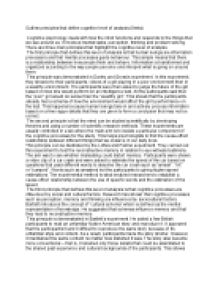 ﻿Outline principles that define cognitive level of analysis (8mks) Cognitive psychology deals with how the mind functions and responds to the things that we see around us. It involves mental tasks, perception, thinking and problem solving. There are three main principles that highlight the cognitive level of analysis. The first principle that defines this level of analysis is that human beings are information processors and that mental processes guide behaviour. This simple means that there is a relationship between how people think and behave. Information is transformed and organized according to the way people perceive and interpret what is going on around them. This principle was demonstrated in Darley and Gross?s experiment. In this experiment, they showed to their participants, videos of a girl playing in a poor environment then in a wealthy environment. ...read more.

The second principle is that the mind can be studied scientifically by developing theories and using a number of scientific research methods. These experiments are usually controlled in a lab where the main aim is to isolate a particular component of the cognitive processes for the study. This helps psychologists to find the cause-effect relationship between different things that we observe in our daily lives. This principle can be illustrated by the Loftus and Palmer experiment. They carried out this experiment to test the reconstructive memory in relation to eye witness testimony. The aim was to see whether misleading could distort memory. Participants were shown a video clip of a car crash and were asked to estimate the speed of the car based on questions that used different words to describe the car crash such as ?smash?. ...read more.

Research has shown that cognitive processes such as perception, memory and thinking are influenced by sociocultural factors. Bartlett introduced the concept of ?cultural schema? which is defined as the mental representation of knowledge. He suggested that schemas influence memory and that they lead to reconstructive memory. This principle is demonstrated in Bartlett?s experiment. He asked a few British participants to read an unfamiliar Native American story and reproduce it. It appeared that the participants found it difficult to reproduce the same story because of its unfamiliar style and content. As a result, participants made the story shorter. However, it maintained the same content no matter how distorted it was. The story also became more conventional ? that is ,it retained only those details that could be assimilated to the shared past experience and cultural backgrounds of the participants. This shows that previous knowledge determines the way people interpret incoming information and memory. ...read more.