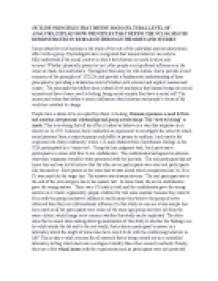 ﻿OUTLINE PRINCIPLES THAT DEFINE SOCIOCULTURAL LEVEL OF ANALYSIS, EXPLAIN HOW PRINCIPLES THAT DEFINE THE SCLOA MAY BE DEMONSTRATED IN RESEARCH THROUGH THEORIES AND STUDIES Sociocultural level of analysis is the study of the role of the individual and its bidirectional effect with a group. Psychologists have recognized that human behavior can only be fully understood if the social context in which the behavior occurred is taken into account .Whether physically present or not ,other people exert profound influences on the ways we think, feel and behave .Throughout this essay we will outline ,that is provide a brief summary of the principles of SCLOA and provide a fundamental understanding of these principles by providing a detailed account of studies with relevant and explicit reasons and causes . The principles that define socio cultural level analysis is that human beings are social animals and have a basic need to belong, being social animals they have a social self. The norms and values that define a society influences their behavior and people?s views of the world are resistant to change. People have a desire to be accepted by others, to belong. Humans experience a need to form and maintain interpersonal relationships and group memberships. This "need to belong" is innate, This is so strong that all too often it makes us behave in a way that surprises us or shocks us. In 1951 Solomon Asch conducted an experiment to investigate the extent to which social pressure from a majority group could affect a person to conform. ...read more.

Each boy was tested in isolation. The boys were told that they cannot allocate points to themselves and would not know the identity of the individuals to whom they would be assigning these rewards and penalties since everyone would be given to a number code. The results showed that within the same groups, fairness was displayed. When points had to be allocated to members of two different groups at the same time, boys tend to give more points to the boy in their group. Randomly categorizing boys into meaningless groups, in-group bias and out-group discrimination was shown. This means that bias and discrimination against the out-group comes automatically in any group situation without any competition or hostility but simply from categorization. Lastly, the results also show that the process of categorization oneself into a group gives a distinct meaning to the individual?s behavior, therefore creating a positive valued social identity. However this study is artificial as in it lacks ecological validity as in everyday life categorization does come with its certain amount of competition. There is a possible interpretation bias here as although the boys showed bias towards their own group, this bias was not very extreme and seemed to be moderated by a sense of fairness. A major strength of the procedure was the high level of control Tajfel managed to employ. For example, there was no face-to-face interaction between group members; the boys only knew of other in-group/out-group members by a code number. ...read more.

Festingers had heavily biased the results of this study as infiltration of 5 members in this small group lead the true believers to firm up their own thoughts and brought about more commitment to their cause than they usually might have had. Through further research of this study we see that many people who part took in this study had their careers ruined and were threatened of being institutionalized raises many ethical issues relating to confidentiality of this study and physical and psychological harm to the participants. Having used an observational research study Festingers control over the study and its variables are very less. The small number of participants used shows minimal representation of the whole population and hence cannot be standardized or cross culturally generalized. To prevent this Festinger should have used fewer number of infiltrators and should not have directly participated in the cult . As there could have been a researchers bias as he could have taken into account only what he wanted in order to get the results he wished for. Finally, In conclusion The socio-cultural level looks at behavior as dependent upon the current situation or circumstances i.e. events external to the individual. The principles focusing SCLOA prove that social and cultural environment influence individuals and people construct their own assumptions of themselves and their social identities . With the help of some famous studies, each principle has been broken down to help in depth understanding of SCLOA .And thus it is seen, that people want connectedness with, and a sense of belonging to, others and this is a necessity for our survival Tanisha Sabhaney ...read more.