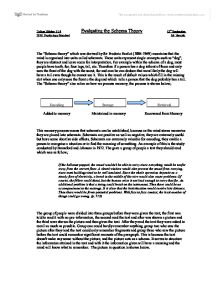 Postive &amp; negative effects of Schema. The Schema theory which was derived by Sir Frederic Bartlet (1886-1969) ascertains that the mind is organised into units called schemata. These units represent single concepts such as dog, they are abstrac

Tobias H�cker 11.4 Evaluating the Schema Theory 13th September 2010 Psychology Standard Mr Harnish The "Schema theory" which was derived by Sir Frederic Bartlet (1886-1969) ascertains that the mind is organised into units called schemata. These units represent single concepts such as "dog", they are abstract and leave room for interpretation. For example within the schema of a dog, most people have teeth, fur, four legs, tail, etc. Therefore if a person has a dog infront of them and only sees the front of the dog with the snout, fur and ears he can deduce that most likely the dog will have a tail even though he cannot see it. This is the result of default values which fill in the missing slot when one only sees the front o the dog and which tells a person that the dog probably has a tail. The "Schema theory" also relies on how we process memory, the process is shown below; Encoding Storage Retrieval Added to memory Maintained in memory Recovered from Memory This memory process means that schemata can be established, because as the mind stores memories they are placed into schemata. Schemata are positive as well as negative, they are extremely useful but have some abortive side effects. Schemata are extremely valuable for encoding, they enable a person to recognise a situation or to find the meaning of something. ...read more.

One common stereotype is the gender stereotype in which often women are expected to do the house work, men to have a career, etc. This is due to schemata as the women schema includes house work, cleaning and many other similar things, whereas the male schema involves having a career, doing sports, being stronger than women and making money. Schemata also result in racism, as if a person sees a dark skinned person committing a crime on TV repeatedly the person will start associating dark skinned people with crime. Crime is then added to the schema. A prejudice study which was conducted in 1968 by a school teacher showed how schemata influence people. To show how unfair racism was she told her school class that children with brown eyes were inferior to those with blue or green eyes. The brown eyed children were given an armband and weren't allowed to things the other children were. They weren't for example allowed to drink out of the same water fountain. She noticed that the children slowly added being stupid to the schema of brown eyed children and intelligence to that of the fair eyed. Therefore everytime a blue-eyed child met a brown-eyed student he thought he was stupid and inferior, due to his schema. This study shows how schemata form prejudices and stereotypes, even if one doesn't intentionally want to be racist, he unknowingly adds certain prejudices to his schemata. ...read more.

"Scripts" as the name suggests are a set order in which a person expects events to occur. The people imagining the restaurant, know what they need to do in what order and have no problem recovering the information in a specif order. Scripts allow a person to not only recall information but to sort the information into a specific order through which he is then able to, master situations. Schemata are abstract, so that for one they can not only fill in information but also apply the information. Which means that if one is told to go to a kitchen one has never been to before one can usually always identify the fridge, oven, microwave and other kitchen objects because the schema can abstractly apply them. This is similar to the dog example used before, not matter which dog a person sees, whether a golden retriever, a doberman, a rottweiler or a chihuahua which all look very different a person can nearly always deduce that a dog is a dog, because he fits into the schema of having four legs, teeth, a tail and a snout. Schemata are extremely useful and although they have the setbacks of people becoming racist, without them no human would be able to function properly, as he wouldn't know what information to recover in what situation, whether to remember something or not and a person would often not be able to identify things for what they are. Therefore schemata are extremely important for humans day-to-day life and incredibly valuable as they allow us to function in an appropriate manner. ...read more.