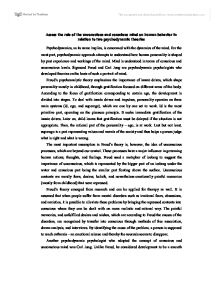 Assess the role of the unconscious and conscious mind on human behavior in relation to two psychodynamic theories Psychodynamics, as its name implies, is concerned with the dynamics of the mind. For the most part, psychodynamic approach attempts to understand how human personality is shaped by past experience and workings of the mind. Mind is understood in terms of conscious and unconscious levels. Sigmund Freud and Carl Jung are psychodynamic psychologists who developed theories on the basis of such a portrait of mind. Freud's psychoanalytic theory emphasizes the importance of innate drives, which shape personality mostly in childhood, through gratification focused on different areas of the body. According to the focus of gratification corresponding to certain age, the development is divided into stages. To deal with innate drives and impulses, personality operates on three main systems (id, ego, and superego), which are one by one set to work. Id is the most primitive part, operating on the pleasure principle. It seeks immediate gratification of the innate drives. ...read more.

Another psychodynamic psychologist who adopted the concept of conscious and unconscious mind was Carl Jung. Unlike Freud, he considered development to be a smooth life-long process. The development of personality depends for the most part on individuation, which is a process of expanding conscious awareness by the ego making contact with the unconscious portions of the self. Its goal and motivation was to approach the unconscious, specifically, the collective unconscious. According to Jung, the collective unconscious is a record of human experience in the mind similarly to evolutionary history in the body. It is represented by the archetypes, the unconscious images, myths, and symbols that provide individuals with wisdom about perceiving and comprehending the world, which are universal across cultures. The image of the totality of self cannot be represented by the same metaphor as in Freud. The conscious and unconscious are distinct parts rather than the layers of an iceberg. ...read more.