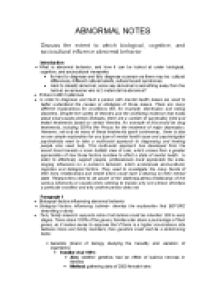 ﻿ABNORMAL NOTES Discuss the extent to which biological, cognitive, and sociocultural influence abnormal behavior Introduction 1. What is abnormal behavior, and how it can be looked at under biological, cognitive, and sociocultural viewpoints 1. Its hard to diagnose and fully diagnose a person as there may be: cultural differences, different cultural beliefs, cultural bound syndromes 2. Hard to classify abnormal, some say abnormal is something away from the normal, so someone who is 2 meters tall is abnormal? 1. Picture is still mysterious 2. In order to diagnose and treat a person with mental health issues we need to better understand the causes or etiologies of those issues. There are many different explanations for conditions like, for example, depression and eating disorders. Despite the variety of theories and the conflicting evidence that exists about what causes certain illnesses, there are a number of successful, tried and tested treatments based on certain theories. An example of this would be drug treatments, including SSRIs like Prozac for the treatment of major depression. However, not only do many of these treatments spark controversy, there is also no one simple explanation for any type of mental health issue and psychologists/psychiatrists need to take a multi-axial approach to diagnosing and treating people who need help. This multi-axial approach has developed from the recent trend towards a more hollistic view of care, which comes from a greater appreciation of how these factors combine to affect a state of mental health. In order to effectively support people, professionals must appreciate the wide-ranging influences on a person?s behavior, which encompass socio-cultural, cognitive and biological factors. They need to investigate the many facets of their lives, relationships and health which could have a bearing on their mental state. Researchers need to be aware of the diathesis-stress relationship of the various influences or causes when seeking to explain why one person develops a particular condition and why another person does not. ...read more.

Cannot test theory 1. Lacasse and Leo: no evidence that depression is caused by a simple neurotransmitter deficiency 1. Shows that modern neuroscience is complex, poorly understood 2. Citizen serotonin theory because drugs that affect serotonin levels are heavily advertised and most prescribed drugs for depression 1. However there are people who get better from the drugs.. 2. However its not possible to identify precisely factors involved in imbalance 3. Research so far is on process of neurotransmission rather than the neurotransmitters itself 1. Cortisol Hypothesis: depression is associated with high levels of cortisol 2. Cortisol: hormone of the stress system, involved in fear and anxiety reactions 3. High levels of cortisol in patients with depression 4. Possible link between long term stress and depression 5. High levels of cortisol may be because of lower density of serotonin receptors, and it weakens the function of receptors for noradrenaline 1. Shows how complex brain chemistry is 2. Depression treatments remain problematic 3. Relationship between stress and depression - not well known 4. Not one to one relationship 5. People do develop depression without being previously stressed, and people who develop stress do not necessarily develop depression 1. Stress hormones affect behavior by regulating efficiency of certain neural pathways (related to serotonin, noradrenaline, and dopamine) 1. Long term depression --> structural change in the brain, e.g. hippocampus - which loses many neurons if depression happens for a long time 2. Decrease stress hormone in the hippocampus and prefrontal cortex of suicidal victims 3. High prevalence of depression amongst people with Cushing's syndrome (excessive production of cortisol) 1. When given drug to normalize cortisol, their depression disappears 2. Evidence of link between cortisol and depression Paragraph 2- Cognitive 1. People who feel depressed think depressed thoughts 2. Depressed mood leads to cognitive symptoms 3. Depressed cognitions, cognitive distortions, irrational beliefs produce disturbance of mood, self criticism, pessimism 4. ...read more.

Hollon and Beck: cognitive therapies are more effective than drug treatment alone at preventing relapse or recurrence (except when drug treatment is continued for long term) Paragraph 4 (against) 1. Clinicians may not be as focused and detailed in finding the cause because they can just keep trying different approaches 2. They may have no clear direction for treatment, just labeling themselves as eclectic 3. Requires knowledge and skill to deliver eclectic approaches effectively 4. Culture differences making it hard for eclectic approach 5. Mutlaq and Chaleby 1995 1. Problems with Group therapy in Arab cultures 2. Strict gender roles 3. Deference to members in the group based on age / tribal status 4. Misperception that therapy session is another social activity 1. Costly to approach so many different techniques Discuss the relationship between etiology and therapeutic approach in relation to one disorder Etiology and treatment 1. Contemporary abnormal psych: takes on biomedical, individual or group therapy approaches, depending on the disorder 2. Multifaceted approach to treatment is most efficient 3. Biopsychosocial approach to treatment includes drug treatment, individual therapy (cognitive therapy like CBT), or group therapy (CBT again, or family therapy) 4. Consider the individual as a person suffering from problems rather than patient 5. "client" replaces "patient" 6. Biomedical approaches to treatment are based on assumption that biological factors are involved in the psychological disorder 7. Doesn't mean that biological factors cause the psychological disorder - but it is associated with changes in brain chemistry - neurotransmitters and hormones 8. Drugs used to treat various disorders based on theories of the brain chemistry involved 1. However there is true understanding of the link between neurotransmitters and their symptoms 2. Nor why some drugs work in some cases but not all 3. Not all clients respond to the same drugs 1. Clinicians must find appropriate drug and dosage per person, and they must be prepared to find replacements for the drugs ...read more.