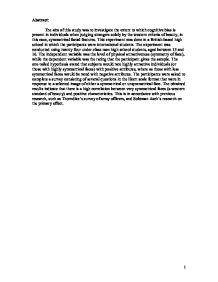 Abstract: The aim of this study was to investigate the extent to which cognitive bias is present in individuals when judging strangers solely by the western criteria of beauty, in this case, symmetrical facial features. This experiment was done in a British-based high school in which the participants were international students. The experiment was conducted using twenty four under-class men high school students, aged between 13 and 16. The independent variable was the level of physical attractiveness (symmetry of face), while the dependent variable was the rating that the participant gives the sample. The one-tailed hypothesis stated that subjects would rate highly attractive individuals (or those with highly symmetrical faces) with positive attributes, where as those with less symmetrical faces would be rated with negative attributes. The participants were asked to complete a survey consisting of several questions in the likert scale format that were in response to a selected image of either a symmetrical or unsymmetrical face. The obtained results indicate that there is a high correlation between very symmetrical faces (a western standard of beauty) and positive characteristics. This is in accordance with previous research, such as Thorndike's survey of army officers, and Soloman Asch's research on the primary effect. Introduction: The experiment is framed from the cognitive perspective, which deals with thinking, with a focus in attribution and perception. The halo effect is a classical finding in psychology, and is thought to be an unintentional bias. It is the idea that one person's central positive or negative trait (for example, attractiveness as a positive trait), influence another's judgements about their other traits (such as intelligence). Our experiment is based on previous research conducted by researchers Edward Thorndike, Soloman Asch, and Wheeler and Kim. Edward Thorndike was the first to support the halo effect with empirical research. He defined the halo effect as 'a problem that arises in data collection when there is a carry-over from one judgement to another'. ...read more.

Figure 1 is a bar graph showing the mean for both groups. To test the significance of the results, a Man Whitney U test was used (see appendix 2). This was done because the results of the experiment are one-tailed, unrelated and ordinal data. Symmetrical Unsymmetrical At one degree of freedom for 0.05% level of significance the critical value of U must be less than 37. In this case U was zero, and consequently lower than 37, so we could reject the Null Hypothesis and accept the Research Hypothesis. p<0.0001 which means that the results were highly significant. The probability of getting these results by chance or random error was less than 0.1%. Discussion The results show that the research hypothesis is accepted at the 0.05 level of significance for the Mann Whitney U test. This means that students rated attractive individuals (or those with highly symmetrical faces) with positive attributes such as popular and friendly, where as those with less symmetrical faces were rated with negative attributes such as unpopular and unfriendly. This finding is similar to the research Thorndike conducted, where he asked army officers to rate their charges in the categories of intelligence, physique, leadership, and character. He found that, like our experiment, the participants tended to rate more highly those who were more physically attractive than those who weren't. The results also support the work of Soloman Asch. Asch's experiment concluded that once a central trait has been identified the halo effect is applied, and then it is assumed that all that persons traits are negative or positive. In our case, the central trait was attractiveness, and from that the significant majority of our participants then perceived the person with only positive traits or negative traits. Correspondingly, Wheeler and Kim, (1997) found that Korean, American and Canadian students who were perceived as being more attractive were rated as more sociable and friendly than non-attractive students. ...read more.

Please take a slip of paper from the hat. Group 1 will be the first group to take the survey. Will participant 1 please follow us outside?" Just to remind you, your answers are entirely confidential and you have the right to withdraw your answers at any time during this experiment. You also may ask for your results after the experiment is completed. Please look at the following image and answer the below survey as honestly as you can. After participant 1 completed the survey, the participant was asked to go back to the classroom and participant 2 was asked out to complete the survey. This action was continued until all 30 participants had completed the survey. Appendix 6 - Photographic Samples Group 1- Symmetrically Faced Individual: Image 1 is was manipulated in Photoshop to create an exact mirror image on each side. The proportions of her face were created by using the guidelines of "the golden ratio" a feature that has been used as a western characteristic of beauty since the roman times. Group 2- Unsymmetrical Faced Individual Image 2 was also manipulated using Photoshop. The eye sizes have been made different and the face elongated. Her eyebrows are of dissimilar lengths and two beauty marks create asymmetry of the skin. The image itself is also asymmetrical in posture. Appendix 7 - Survey Forms The survey was based on Goldberg's "Big five" personality traits (1993), outlining the five broad factors or dimensions of personality. These factors, sometimes referred to as OCEAN, are Openness, Conscientiousness, Extraversion, Agreeableness, and Neuroticism; in this form, they are also referred to as the Five Factor Model (FFM). However, some discussion remains about the Openness factor, which is sometimes also referred to as "Intellect". Our survey then asked the participants to rate the photographs in terms of a. how open the person is, b. how truthful and genuine the person is. c. how popular or how likely the person is to have friends, d. how friendly they are, and e. how active or energetic they are. ?? ?? ?? ?? 1 ...read more.