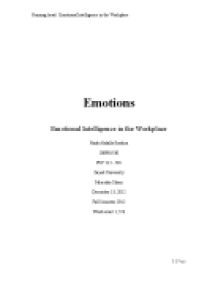 & (Kafetsios, 2004). Conversely, those with low emotional intelligence tend to be aggressive and were engaged in alcoholism as well as smoking (Mayer, Perkins, Caruso, & Solvey, 2001a, Rubin, 1999), (Brackett et al., 2004; Mayer et al. 2004) & (Trinidad & Johnson, 2002). Individuals should know that emotional intelligence can keep them away from involving themselves in harmful activities, and living life to the fullest. It is proposed that exam anxiety and overall academic performance can be enhanced by emotional intelligence. In addition, it also affects employees interaction with colleagues, and job performance (Ashkanasy & Daus, 2005; Lopes, Cote, & Salovey, 2006a). Leadership success and the emotional intelligence in the UAE Amongst the Middle East nations, United Arab Emirates (UAE) is the leading business capital. A study was conducted by Freedman et al. (2010) based on the Six Seconds Emotional Intelligence Assessment (SEI). Various leaders with job positions were selected from different sectors including freelance, employee, manager, executive, and entrepreneur within the Middle East context. The results below revealed that there is a strong association between emotional intelligence (EI) and performance, especially between the group of entrepreneurs of over 70%. It is obvious that the top performers scored 1.2 times higher on EI than those with low performance rate. ...read more.

Whereas a couple of students thought that KSA is a major business center. Figure 5 In the last question, participants were asked whether Emiratis, in general, are knowledgeable of what emotional intelligence is. 6 students stated that Emiratis are aware of EI in UAE nowadays, a student suggested that it is prospering in both life and business aspects. Another respondent said that it is because UAE is a collectivist country, which means that people in this country care about each other. On the contrary, the number of those who said Emiratis do not have a superficial awareness of EI is equal to those who claimed that they do not know. Conclusion In conclusion, Emiratis actually have a moderate awareness of emotional intelligence. EI is considered as a wonderful tool for anyone who needs to be successful. It has been noted that emotional intelligence usually has a strong correlation between several variables, especially performance to achieve success. It is noteworthy that to acquire a new skill such as, emotional intelligence needs courage, patience, and consistency. As a result, an emotional intelligent employee can have a close relationship with his/her fellows. The research shows that self-awareness is one of the unique characteristics of emotional intelligence. Lower levels of EI may lead to serious bad habits including aggressiveness. Several positive outcomes can result from emotional intelligence enhancing mental health, relationships, academic, and workplace performance. ...read more.