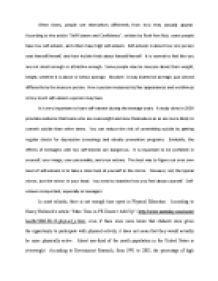 Self Estteem, PE and Aspergers.

﻿Often times, people see themselves differently from how they actually appear. According to the article ?Self-Esteem and Confidence?, written by Ruth Ann Ruiz, some people have low self-esteem, and others have high self-esteem. Self-esteem is about how one person sees himself/herself, and how he/she feels about himself/herself. It is normal to feel like you are not smart enough or attractive enough. Some people may be insecure about their weight, height, whether it is above or below average. However, it may indeed be average, just viewed differently by the insecure person. How a person measures his/her appearances and worthiness is how much self-esteem a person may have. It is very important to have self-esteem during the teenage years. A study done in 2009 provides evidence that teens who are overweight and view themselves as so are more likely to commit suicide than other teens. You can reduce the risk of committing suicide by getting regular checks for depression screenings and obesity prevention programs. ...read more.

An economist of Cornell University, John Cawley, as well as other colleagues, experimented and analyzed data on roughly 37,000 teenagers who were in grades nine through twelve. They did this in order to see if the higher Physical Education requirements were effective. There were surveys performed in 1999, 2001, and 2003. When the states required an extra year of high school students to be in physical education, they found that male students spent an additional 7.6 minutes per week exercising, and females spent an additional 8 minutes and 6 seconds exercising. This small increase may be due to either schools ignoring the physical education laws, or students not being active during physical education class. Additionally, the amount of time spent in physical education did not appear to have an effect on the risk of obesity in teenagers. If the states in the country want to decrease obesity in youths, not only do they need to increase the time of physical activity, but the amount of physical activity and consideration in revising the curricula for physical education as well. ...read more.

Since it is a relatively newly discovered disorder, it is yet to be determined by scientists how exactly to categorize Asperger?s, due to a lack of an exact definition. Asperger?s results from abnormalities in the brain, resulting in an absence of the part of the brain that allows people to comfortably fit in with the social world. Syndromes of people with Asperger?s are having significant difficulties interacting with most people, they often have unusual interests that they pursue with an extreme intensity, they tend to think in a concrete and very literal manner, and have a lack of common sense. Having Asperger?s is usually not apparent to most people surrounding the individual, which could be a great disadvantage. The people surrounding the individual with Asperger?s may think that he is just acting rude or immature, when really he can?t control it. Whereas Down syndrome is highly recognizable and instantly gains understandings of the surrounding people, and the people wouldn?t doubt their actions since they are aware that they have a disability. ...read more.